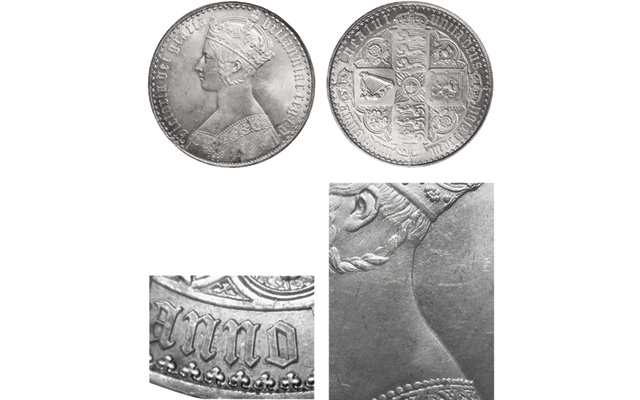 Horizontal, raised tooling marks are visible in the field behind Queen Victoria’s neck among with raised dots on and behind her neck. Raised dots also appear on the word ANNO.

Great Britain’s silver 1847 Gothic crown is widely considered to be one of the most attractive coins produced by the British Royal Mint. A Proof-only issue of 8,000 pieces, it routinely sells for thousands of U.S. dollars in virtually any condition. Gem examples sell for $30,000 or more.

It is no surprise that the 1847 Gothic crown has been heavily counterfeited over the years. ANACS recently inspected two counterfeits, both struck from the same fake dies, and both exhibiting the same diagnostic depressions, tool marks and other defects.

The dies were produced using the transfer process, where a genuine model coin has its design details transferred over to a set of fake dies. This results in a counterfeit that is faithful to a genuine coin in nearly every way, usually including the weight, diameter, thickness, and metal composition. A close examination with a quality magnifier is needed to detect these counterfeits.

On the obverse are a number of horizontal raised tooling marks in the field behind Victoria’s neck, as well as a number of tiny raised dots on and behind her neck. Near the top of the queen’s ear is a rather noticeable raised lump of metal.

On the reverse are several raised dots around ANNO and a few light depressions on the letters.

A collector interested in obtaining an example of the 1847 Gothic crown should pay particular attention to the edge, either comparing it to a genuine example, or to online images.