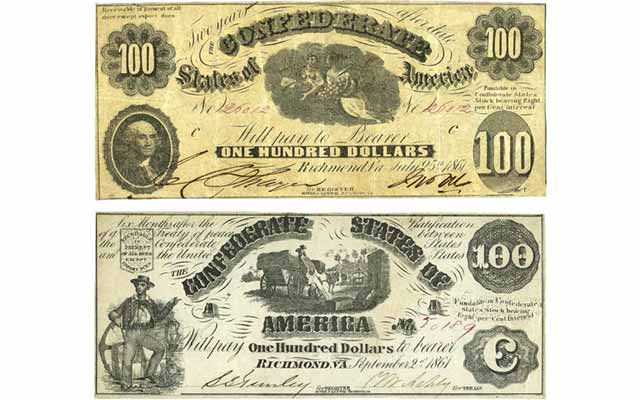 The first person to die for counterfeiting Confederate States of America paper money issued $100 notes similar to one of the types shown, which he printed, along with an accomplice, and signed himself.

Since Colonial times, the prescribed punishment for counterfeiting was often death.

In antebellum America, however, counterfeiters often faced nothing more than jail time and were often able to avoid even that punishment. This was probably due, in part, to the fact that the usual victim of the counterfeiter was not a government but a bank.

This changed at the beginning of the Civil War. Both governments turned to the issuance of paper money to finance their war efforts and counterfeiters quickly saw the advantage of making imitations of notes that were issued in quantities numbering in the millions of dollars.

Unlike the federal government, which maintained relationships with the established bank note companies, the Confederate government was cut off from the traditional bank note providers from the onset of war.

Federal authorities raided both National Bank Note Co. and American Bank Note Co. in New York and ended their relationship with the Confederate Department of the Treasury days after the start of the war in April 1861.

Faced with the need for ever increasing amounts of paper money and a stringent Union naval blockade, the Confederate Department of the Treasury turned to local sources whose lithographed products were sometimes difficult to tell apart from the numerous counterfeits that began to appear.

The Confederate government had little room for error and so enacted the death penalty for counterfeiters. According to the Richmond Dispatch of Aug. 23, 1862, the first execution of a counterfeiter in the Confederacy occurred on Aug. 22, 1862, when one John Richardson, alias Louis Napoleon, was hanged by the neck until dead after being convicted of “counterfeiting.”

Richardson was not, however, your typical counterfeiter. He and an accomplice, George Elam, broke into the Richmond printing plant of Hoyer & Ludwig, at the time one of the leading Confederate printers, and ran off more than $1,600 in $100 notes from the production lithographic stone.

They then forged the signatures based upon those found on a genuine bill and started passing the forgeries. Technically then, the notes were printed from a genuine lithographic stone, stolen, and then illegally finished by adding forged signatures and serial numbers. As such they were not counterfeits in the strictest traditional sense of the term.

In the end, that technicality made no difference to John Richardson, who “slipped the surly bonds of earth” for his transgressions.

Down in Alabama, railroad note has Canadian connection: Collecting Paper