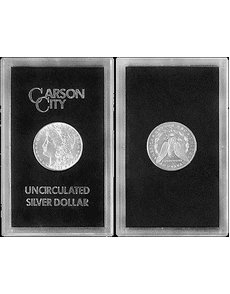 Close examination of what purports to be a genuine 1881-CC Morgan dollar in a government-issued GSA holder disclosed that not only is the coin counterfeit, but the holder and its insert are not correct for the issue. Part of the holder appears to be from a modern U.S. Mint product of similar size to the GSA holder. 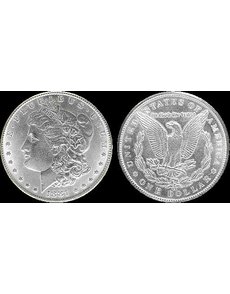 ICG authenticators determined this purported 1881-CC Morgan dollar is a modern Chinese counterfeit that was lightly cleaned, rather than having the frosty white appearance of a genuine Morgan dollar struck at the Carson City Mint. 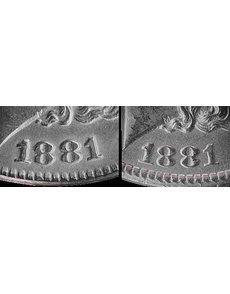 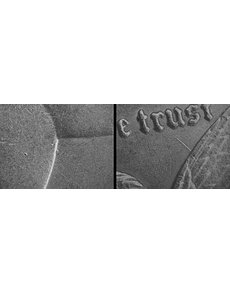 In the top photo, lumps of raised metal can be found on Liberty’s neck and jaw on the obverse of the counterfeit 1881-CC Morgan dollar. In bottom photo, a tool mark is located on the counterfeit’s reverse, emanating from the eagle’s left wing, below the U in TRUST.. 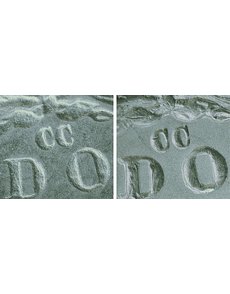 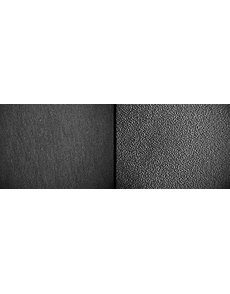 The texture of the black insert from the fake encapsulation is more flat, above left, while that from a genuine GSA holder, above right, is distinctly pebbled.

Printing on the fake counterfeit insert, above left, is rough and pebbly, while that on a genuine GSA insert, above right, is crisp, distinct and lustrous. 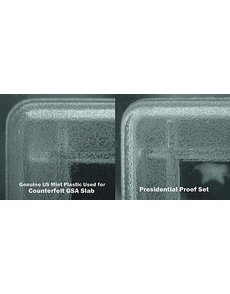 Side-by-side images show, left, the corners of the holder housing the counterfeit coin and, right, those of a holder the U.S. Mint uses to house numismatic sets of Presidential dollars. 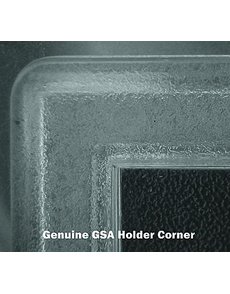 This image shows the corners as they appear on a genuine GSA plastic holder.

An 1881-CC Morgan dollar housed in what its buyer believed was a genuine government-issued GSA encapsulation has been determined by Independent Coin Grading authenticators to be a modern Chinese counterfeit.

Additionally, while the holder in which it was contained might be government issued, it’s not the kind the General Services Administration employed from 1972 through 1980 to market thousands of Uncirculated Morgan dollars discovered stored in Treasury vaults.

ICG experts believe the plastic holder in which the counterfeit 1881-CC dollar was housed is likely the kind of unsealed holder the U.S. Mint has used to house numismatic sets of Presidential dollars for public sale.

The GSA dollars are extremely popular among collectors and even common dates garner a premium because of their pedigree.

Each Mint State coin from the Treasury vaults was sealed in a special, slablike case.

A thin black and silver cardboard box held the slab and contained a numbered certificate.

Many of the original boxes and cases were destroyed as coins were sent to grading services; nevertheless, GSA coins in original holders can still be found with a little searching, according to Randy Campbell, senior numismatist and authenticator at ICG, and a noted authority on U.S. silver dollars.

Campbell said July 18 that on July 13 — the final day of the three-day Florida United Numismatists Summer Convention in Orlando — a couple brought the suspect 1881-CC GSA Morgan dollar to ICG’s bourse table at the show. The couple appeared at the grading service’s booth to receive a free verbal opinion on the grade of the coin soon after an announcement had been made over the bourse public address system that ICG was offering such services.

In addition, the counterfeit exhibited evidence of having been cleaned, with residue or coating where the relief meets the field, he said.

Campbell said after he and fellow ICG grader and authenticator F. Michael “Skip” Fazzari examined the coin, they turned to determining the authenticity of the holder and black insert securing the coin in the holder.

The two authenticator-graders determined that not only was the black insert counterfeit, having silver printing on black cardboard instead of on black plastic, but the plastic holder was not of the type that would have been used for issuing the genuine GSA dollars.

It was determined the plastic holder is likely of the type currently used by the U.S. Mint to house numismatic sets of Proof Presidential dollars for sale.

The two parts of the set holders are snapped together and not permanently sealed, whereas are the GSA holders.

Fazzari indicates it’s the type of counterfeit that is sufficiently well made to fool roughly 40 percent of professional dealers at a show who might not give the piece more than just a cursory examination since it was housed in what initially appeared to be a genuine General Services Administration holder.

The quality of most of the Chinese counterfeits that ICG has examined, according to Campbell and Fazzari, is crude, especially in the execution of the date digits.

Lumps of raised metal are present on Liberty’s neck and jaw on the obverse and a tooling mark is evident on the reverse exiting the eagle’s left wing, just below the U in TRUST.

Fazzari purchased the counterfeit GSA 1881-CC Morgan dollar in its holder from the couple for an undisclosed sum.

Fazzari plans to use it in educational presentations on counterfeit detection. ¦