Could it be a Type II clash? 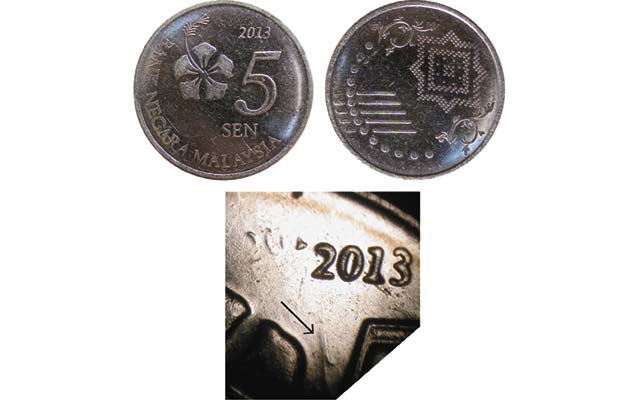 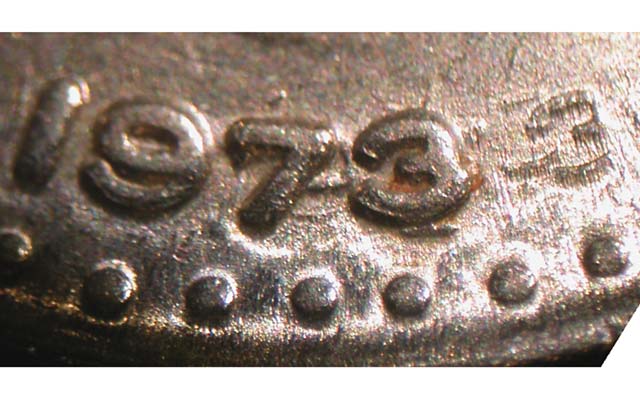 This Colombia 20-centavo coin displays a sloppily repunched date. Two feeble preliminary taps left the last three digits far to the right of where they should be. A flared digital base beneath the normal 3 suggests that a number punch with the wrong font (one with serifs) was initially employed.

Several weeks ago I purchased a 2013 Malaysia 5-sen coin with an incomplete extra date that is faint, raised, and drastically out of place. The first three digits are located well to the left of the normal date and rotated counterclockwise.

I ran through a number of possible explanations, none of which was entirely satisfactory. I first considered a “misplaced date.” This die variety is essentially a repunched date taken to an extreme. Punched into a working die by hand, the misplaced date is left marooned in the wrong spot.

Some misplaced and repunched date varieties rival the Malaysian coin in the severity of their dislocation. Shown here is a 1973 Colombia 20-centavo coin with two repunched dates lurking within and extending well to the right of the normal date. Two copies of the terminal digit float in empty space.

The problem with this scenario is that global mints no longer appear to punch dates into individual working dies. This time-consuming step has been eliminated by improvements in master die fabrication. I don’t know of any conventional repunched dates among current-issue Malaysian coins. Moreover, one of the experts I queried about this coin, Jason Cuvelier, told me he’s seen a 2008 Malaysia 5-sen piece with a major doubled die that affects the date. This indicates that the date is now part of the master die’s design.

While a strong doubled die is theoretically possible, it also seems unlikely. It is true that a tilted and rotated hubbing can result in a doubled die restricted to one pole. However, if this were the case, then the anther of the hibiscus flower, located up and to the left of the phantom date, should also have been duplicated with equal or greater strength. That is, unless, the presumed tilted hubbing also happened to be an incomplete hubbing that left out the most peripheral parts of the design.

A doubled die is further contra-indicated by the existence of a second 2013 Malaysian 5-sen obverse die that exhibits a misplaced 2 just to the left of the normal first digit. It’s highly unlikely that any doubled die would produce a clearly defined, entirely isolated accessory digit.

I toyed with the idea of a fouled-up master die that was salvaged, abraded, and re-employed as a working die. But the die with the extra 2 would imply the existence of a second botched and repurposed master die. That scenario is a bit hard to swallow.

I queried many die variety experts and the general consensus is that this is probably a Type II counterclash. A Type II counterclash is a form of die damage with design transfer. It occurs when a die strikes a hard object (machine part, piece of hardware, die fragment). Depending on whether one die was protected by a planchet, the impact leaves the intrusive object with a raised design on one or both surfaces. The object then shifts position and is struck again. This transfers the object’s raised design back to the die face (usually the field portion). The die now carries an incuse, mirror-image version of the design. Every planchet struck thereafter will show faint, raised, normally oriented design elements in an unexpected location.

Six Type II counterclashes have been recorded among U.S. coins (four cents, one 1999-P Delaware quarter dollar, and one 2000-P Sacagawea dollar). They’ve been recorded on the reverse faces of four 1999 Canadian Millennium-series 25-cent coins (February, July, September, and December designs), with the last being a quadruple counterclash. The Canadian roster also includes a 2008 25-cent coin with an extra date transferred to the obverse die face.

The counterclash scenario finds additional support in a slight perturbation located in the field to the left of the numerical denomination. Two closely spaced linear disturbances match back of the 5 in their blunt lower tips and in their alignment with numeral 1 of the accessory date. Several Type II counterclashes also feature extensive areas of design transfer.

Given this evidence, I would conclude that the second die, with its extra 2, probably also represents a Type II counterclash.