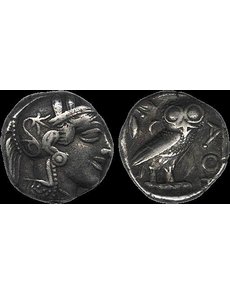 Cornell University plans to catalog and display its 1,500-piece ancient coin collection online. Shown is a coin from the collection: a silver tetradrachm from Athens with head of Athena (obverse) and owl (reverse), from the sixth to fifth centuries B.C.

With a grant provided by the Grants Program for Digital Collections in Arts and Sciences, the university in Ithaca, N.Y., plans to catalog, scan, digitize and post online images of the entire collection.

The coins, scanned as high-quality digital images, will be paired with rules within the image to indicate actual size, and the images will be posted on the Internet as they are completed. Cornell officials estimate that the project will take about two years to complete.

According to Dr. Annetta Alexandridis, assistant professor of Classical Art and Archaeology, Department of History of Art and Visual Studies at Cornell, the coins were “originally acquired by Cornell’s first classical archaeologist, Alfred Emerson and his follower, Eugene Andrews (the latter mostly focusing on Greek coins) in the period from the late 19th century to the 1930s.”

“The most systematic contributions were made under Cornell Prof. Frederick O. Waage (who created the Dept. of History of Art at Cornell) between 1939 and 1964,” Alexandridis said.

The collection was originally catalogued by Professor Peter Kuniholm and Professor Andrew Ramage with student assistance approximately 10 to 20 years ago. As well, the late Professor Philip Grierson identified the circa A.D. 300 Byzantine coins that are part of the collection.

Currently, the coins are randomly stored in paper envelopes and their information is cataloged on file cards. One goal of the project is to organize the coins and place them in protective archival materials as well as verify and transfer the coins’ information to the database.

Assisting Alexandridis in the endeavor will be Laura Wilke, a master’s degree student in archaeology, who will create the metadata for the project, including weighing and measuring the coins and ensuring that catalog information is correct for each. Wilke will also be charged with identifying and cataloguing approximately 300 coins within the collection that have not yet been cataloged.

Alexandridis stated the university will consult with numismatic experts for difficult questions related to identification and preservation.

The university has not yet established a website to allow public viewing of the coins. “I hope we’ll be able to do this as soon as we have made sufficient progress with digitizing,” Alexandridis said. ¦