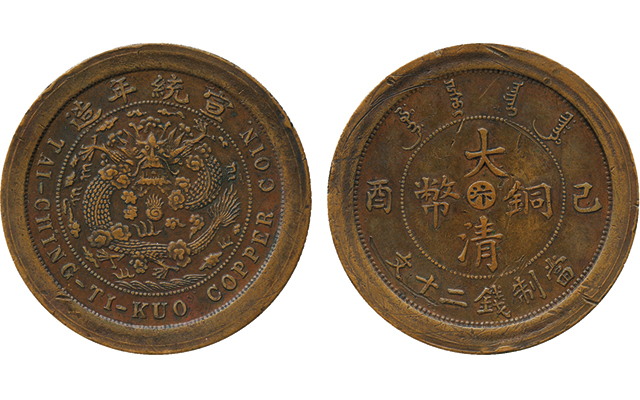 The auction was conducted by by A.H. Baldwin & Son’s Ltd. and Ma Tak Wo Numismatic Co. Ltd.

The Honan Province coin measures 39 millimeters in diameter and was struck on an oversized planchet. The auction house noted it has "minor edge knocks" but is otherwise in Extremely Fine condition.

According to Edward Baldwin, chairman of the company: “This is the only example I have ever seen.  The one illustrated in [Chinese Copper Coins, by Zheng Ren Ji] is another coin, so there are at least two. Beyond that, I’d be guessing.”

Baldwin suggested that “just a few” of the patterns were made but that since they were not popular, the coinage was never issued.

The piece in the Baldwin’s sale is designated the Tai Ching type, indicating the coin is issued under the Qing Dynasty.

The coin, part of the Ake Linden Collection, formerly was purchased in Baldwin’s Aug. 27, 2008, auction of the Dr. Norman Jacobs Collection of Chinese Silver & Copper Coins & Paper Money. In that 2008 auction, the pattern realized $29,900, including the 15 percent buyer’s fee.