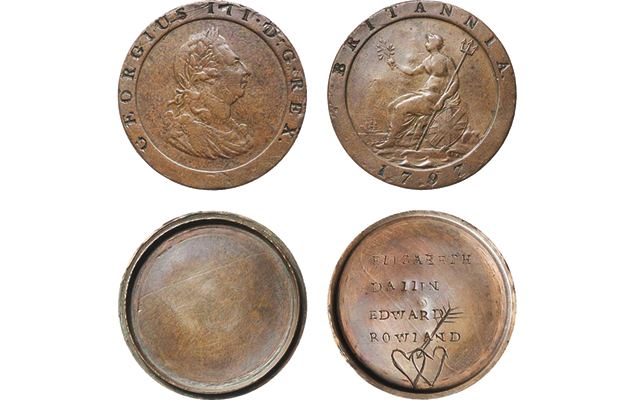 A convict love token was created from this 1797 British Cartwheel penny, having the names of the two lovers inscribed within the hollowed-out center of the large coin.

An artifact of a convict’s love nearly tripled its estimate when sold in Noble Numismatics’ July 29 auction.

Cartwheel pennies are noted for their size and weight (1 ounce, 36-millimeter diameter), which was possible because they were struck using steam power at Matthew Boulton’s Soho Mint. The Royal Mint lacked the technology to strike a coin of that size.

The piece in the Noble auction is cut in half, hollowed out and made into a container, which is inscribed inside on the base ELIZABETH/DA11IN/EDWARD/ROWLAND, according to the catalog, below which appear overlaid hearts with an arrow through them.

Rowland was sentenced at Central Criminal Court in London to seven years, and was shipped to Australia along with 189 other convicts on the Egyptian. The ship departed April 5, 1839, and arrived in Australia about Dec. 5, 1839.

For more details about the auction, visit the firm's website.