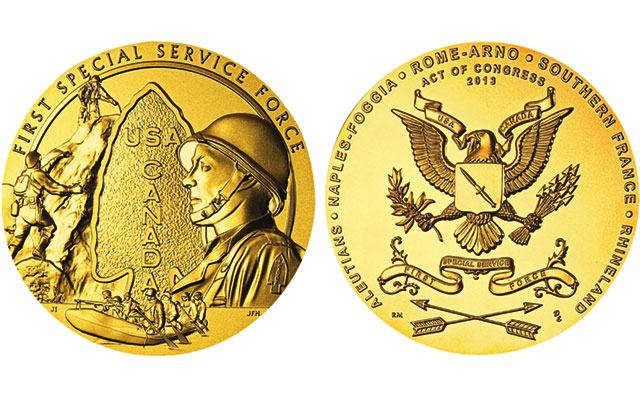 The World War II exploits of the joint U.S.-Canadian First Special Service Force were honored Feb. 3 with the presentation of this congressional gold medal.

The reverse design features the Force’s insignia, with crossed arrows at the bottom of the design, and a banner in the eagle’s beak that reads USA and CANADA.  The Medal is inscribed around the rim with the force's five campaigns — ALEUTIANS, NAPLES-FOGGIA, ROME-ARNO, SOUTHERN FRANCE and RHINELAND. ACT OF CONGRESS and 2013 appear in the upper field, arced below the rim inscriptions.

Nicknamed by the Nazis the "Devil's Brigade" because of their blackened faces, the First Special Service Force was an elite commando unit that wreaked havoc on the enemy, capturing 27,000 of them in 251 days of combat between 1942 and 1944.

The First Special Service Force, comprised mostly of volunteers from the U.S. and Canada, was activated in July 1942 at Fort Harrison near Helena, Mont.

"The Force was initially intended to target military and industrial installations that were supporting the German war effort, including important hydroelectric plants, which would severely limit the production of strategic materials used by the Axis powers," according to the enabling act, Public Law 113-16. "From July 1942 through June 1943, volunteers of the Force trained in hazardous, arctic conditions in the mountains of western Montana, and in the waterways of Camp Bradford, Virginia. The combat echelon of the Force totaled 1,800 soldiers, half from the United States and half from Canada.

"The Force also contained a service battalion, composed of 800 members from the United States, that provided important support for the combat troops."

The legislation details much of the Force's activity and continues, "After the Allied forces secured the Franco-Italian border, the United States Army ordered the disbandment of the Force on Dec. 5, 1944, in Nice, France.

"During 251 days of combat, the Force suffered 2,314 casualties, or 134 percent of its authorized strength, captured thousands of prisoners, won 5 United States campaign stars and 8 Canadian battle honors, and never failed a mission."