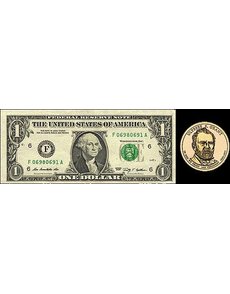 Another piece of legislation placed before Congress addresses the dollar coin versus dollar note issue. The new Senate bill, S. 2049, would end use of the $1 FRN in favor of promoting broader use of dollar coins in circulation.

Another bill aimed at improving the circulation of small-sized dollar coins has been introduced in Congress.

On Jan. 31, Sen. Tom Harkin, D-Iowa, introduced S. 2049, titled, “A bill to improve the circulation of $1 coins, to remove barrier to the circulation of such coins, and for other purposes.” Sen. Harkin was joined by Sen. John McCain, R-Ariz., in introducing the bill. It has been referred to the Senate’s Committee on Banking, Housing and Urban Affairs where it sits with three co-sponsors.

In a Jan. 31 press release, Harkin stated, “Promoting the dollar coin is a smart investment for our country that saves taxpayer’s money.”

He added: “With the deficit looming, we need only look at the cost-savings from this effort to understand why this legislation is so urgently needed. I am hopeful that this bipartisan legislation will continue to gain traction in Congress.”

The Senate bill was introduced as a companion bill to H.R. 2977, the Currency Optimization, Innovation, and National Savings Act (COINS Act), introduced in the House of Representatives by Rep. David Schweikert, R-Ariz., on Sept. 20. That bill currently has 12 cosponsors and has been referred to the House Subcommittee on Domestic Monetary Policy and Technology.

The goal of both the Senate and House bills is the same: to save taxpayer funds by transitioning to the use of $1 coins and away from the $1 Federal Reserve note. Schweikert has stated that the transition could save Americans $184 million a year and nearly $6 billion over 30 years, citing government reports showing that a $1 coin can last 17 times longer than a $1 note. Sponsors for both the Senate and House versions of the bill cite multiple reports by the Government Accountability Office that predict annual savings ranging from nearly $200 million to more than $500 million by making the transition.

The legislation calls for the Federal Reserve System to sequester all Anthony dollars within six months of the date of enactment of the act, and to release them at face value and in bulk quantities to dealers in collectible coins and to countries that have adopted the U.S. dollar as their base unit of exchange. One year after the enactment of the act, these dollars would be declared and treated as obsolete U.S. coins, although they would remain legal tender.

The legislation further requires the Federal Reserve to undertake efforts to improve the circulation and remove barriers to the circulation of the dollar coin, to issue quarterly reports on the success of such efforts, to conduct outreach and education programs to help businesses use the small-sized dollar coin and to work with foreign countries to help them understand the usefulness of a dollar coin.

The bill would permit $1 Federal Reserve notes to be placed into circulation until either the date on which the number of dollar coins placed into circulation after the date of the enactment of this act exceeds 600 million annually or four years after the enactment of the act, whichever occurs first. The act provides that the $1 Federal Reserve note will remain legal tender.

The House bill differs slightly from the Senate version in that the House bill requires an additional report by the Federal Reserve addressing its efforts to improve the circulation of Native American dollar coins.