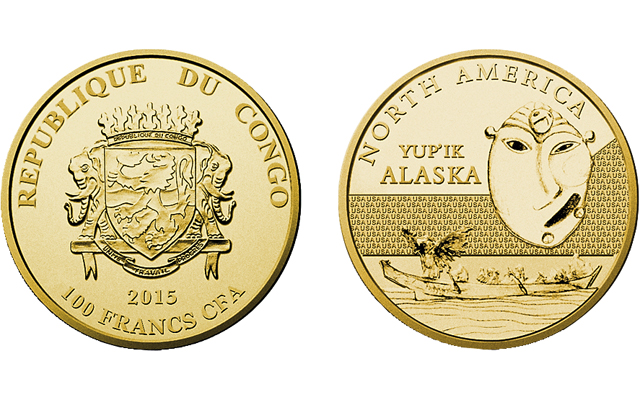 The Kremnica Mint is issuing a series of silver and gold bullion coins, including one showing a native mask of Alaska. The 1-ounce gold 100-francs CFA coin appears here. 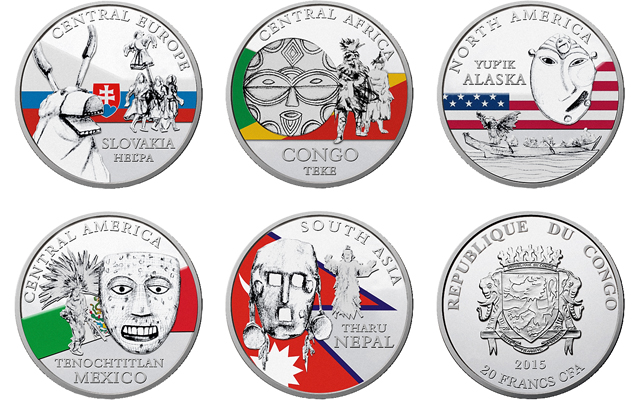 Collectors of world bullion coins will soon have another series to pursue.

The Kremnica Mint in Slovakia announced March 23 that it was coordinating the issue of a series of .999 fine silver and .999 fine gold bullion coins for the Republic of Congo. The series will show tribal masks of the world and will include a native mask from Alaska. The series is scheduled to continue into 2016.

While the Kremnica Mint classifies these coins as bullion, they will be struck to extremely low mintage limits, in Proof finish.

Anyone may reserve the coins through the Mint’s website, according to Roman Pulis in the Kremnica Mint’s marketing department.

“Currently we are the key distributor of them,” he said. “Since the mintage is limited (and it’s a quite low mintage) we have not yet made official treaties with external dealers.”

The reverse of each coin depicts the related mask motif.

The obverse carries the face value and the national emblem of the Republic of the Congo.

The price of the coins will be based on the official prices through the London Bullion Market Association, the Kremnica Mint confirmed.

“In combination with limited mintage, the potential buyers will get a unique investing opportunity into gold and silver,” the mint said.

The Kremnica Mint will also create a tiered marked, offering to buy back the investment coins if customers decide to sell them. Conditions for the repurchase program have not yet been announced.

The silver coins weigh 31.1 grams and measure 40 millimeters in diameter.

Each coin will be placed in a plastic capsule.

Collectors may reserve a wooden case for each denomination, or a case for all 15 coins (though the mint cautions that the plan to issue the cases, after the second coin is released in August, is subject to demand).

The first coin in the series depicts a native Slovakian mask of the mythological animal Turon, which is used during carnival.

The beast, depicted as an ox’s head on a stick with sleigh bells, symbolizes strength and fertility.

A mask from the Teke tribe in Congo appears on the second issue in the series.

Masks are perhaps the most common form of art from Africa, according to the mint. Ritual masks from the Congo region have the shape of the Moon. Certain men in the Teke tribe wear the mask for weddings, funerals or the Kidumu ceremony for young men becoming adults.

Teke masks have a traditional triangular nose and are decorated with symbols and stripes.

The oldest masks from Alaska can be traced to the Yupik peoples, back to 2,500 B.C. These masks often combine human and animal elements.

The Yupik wear the masks for celebrations and dances, as well as storytelling, singing, and praying.

The mask on the coin for Mexico depicts the Pre-Columbian Aztec god Tezcatlipoca, the “Smoking Mirror.”

Aztec masks were worn in various rituals, including religious events and festivals.

The final mask coin in the series depicts a mask of the Tharu tribe of Nepal.

Traditional Nepalese masks are used for healing and shamanism, or ceremonials and rituals devoted to ancestors or gods and deities.

Collectors could begin reserving the coins on March 23.

To learn more about the program or to reserve the coins, visit a dedicated page on the Kremnica Mint’s website.