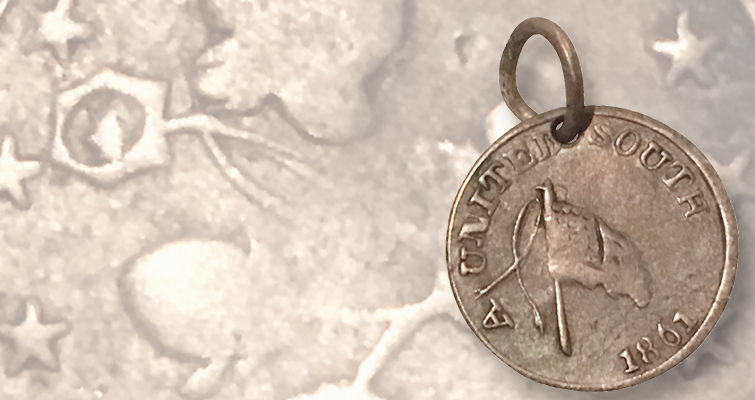 A metal detecting excursion on a former Civil War battle site yield this token that some think circulated as currency. 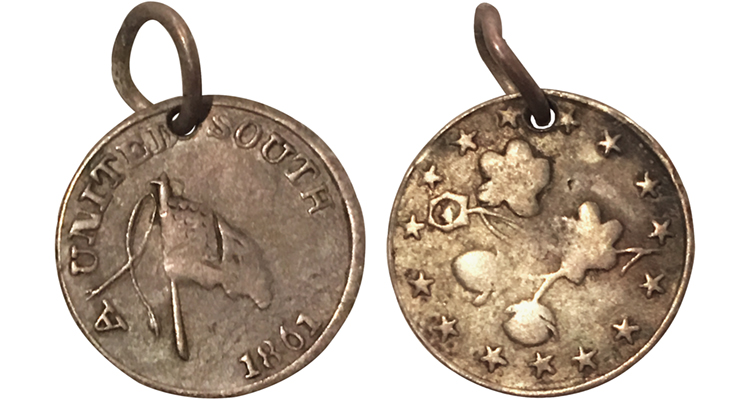 Bradford Haynes found this purported UNITED SOUTH silver token while metal-detecting on the site of the Battle of Stones River, also known as the Second Battle of Murfreesboro, in Tennessee.

The following is the Readers Ask column from Sept. 19, 2016, weekly issue of Coin World:

I am seeking info on a Civil War token I found. It was minted in Murfreesboro, Tenn., in 1861 by A.O.P Sehorn. It has a plain edge.

I am trying to find out more about it if possible. Thank you for your time.

Mr. Haynes discovered this piece while metal-detecting on the site of the Battle of Stone’s River, also known as the Second Battle of Murfreesboro.

His discovery appears to be what some 19th century numismatists labeled as a “Confederate half dime,” although its use in circulation is not confirmed. It might be worth his while to submit the piece to a major third-party grading service for authentication.

In the 1988 reference Walter Breen’s Complete Encyclopedia of U.S. and Colonial Coins, the author suggests that eight to 12 pieces were then known in silver, with all pieces known to him being holed.

The obverse features a flag with 13 stars in one corner, with A UNITED SOUTH and the date 1861 around. The reverse depicts a branch of cotton, with 13 five-pointed stars around.

The existence of the pieces, Breen wrote, was first reported by P. Sid Jones (of the Millburn Wagon Company in Memphis), who received an example on Oct. 9, 1862, the day after the Battle of Perryville, Ky., according to the April 1878 issue of Coin Collectors Journal.

Stack’s Oct. 14, 2003, sale of Part I of the John J. Ford Jr. Collection contained two examples of the UNITED SOUTH tokens. One of the reeded edge pieces, graded Extremely Fine, was holed to the bottom left of the staff holding the flag. The other example, graded About Uncirculated, was not holed. The holed token realized $1,840 at the 2003 auction, while the unholed token realized $6,037.50.

An example formerly part of the Donald Partrick Collection realized $28,200 on Heritage Auctions’ January 2015 sale. The piece, graded and encapsulated About Uncirculated 55 by Numismatic Guaranty Corp., is unholed and has a plain, not reeded, edge.