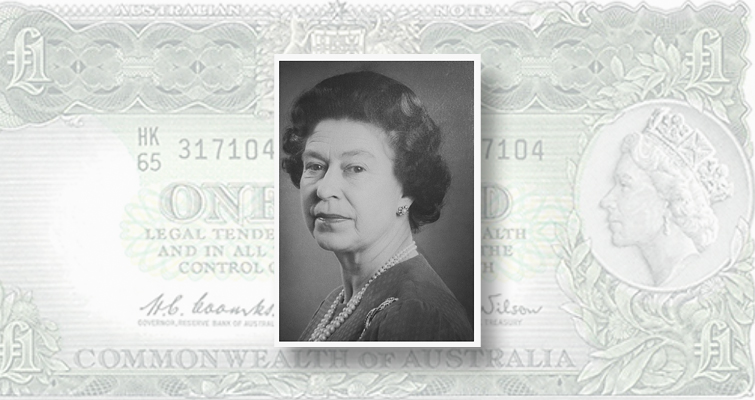 Soon after her ascension, Queen Elizabeth II began to appear on Australian bank notes, including the £1 note first issued in 1953.

Image by Reserve Bank of Australia.

Although Queen Elizabeth II did not appear on paper money issued by the Bank of England until 1960, she has probably appeared on more bank notes than any other woman.

The Commonwealth, of which she was the symbolic head, currently has 56 members. At the time of her death, she was queen and head of state of fifteen of its realms, each an independent state. Also in the Commonwealth are 36 republics and five states having different monarchs (Brunei, Eswatini, Lesotho, Malaysia, and Tonga).

It is a matter of choice for any country whether to feature the monarch on its currency, and it is not certain whether King Charles III will be featured by as many nations as chose to use an image of his mother. She appeared on many issues long before those of the Bank of England. Two of the more prominent issuers to use her image are Canada and Australia.

As noted in the Coin World October 2022 issue, her first appearance was in 1935 on one of the first bank notes issued by the Bank of Canada. That $20 note, printed by the Canadian Bank Note Company, has a portrait of the 8-year-old Princess Elizabeth as the granddaughter of the reigning King George V. The engraving was done by Edwin Gunn of American Bank Note Company, based on a photograph created by Marcus Adams.

She next appeared on Canadian currency in 1954 as Queen Elizabeth II at the age of 25, on all eight notes from $1 to $1,000 in the Canadian Landscape series.

For the note portraits, the crown was removed to distinguish the portrait from another that was on a Canadian stamp. The same portrait was used on the $1 commemorative note of 1967.

She was on the face of the $2, $10, and $1,000 notes in the 1986 Birds of Canada series. This portrait, based on a photograph by Anthony Buckley, shows her wearing a pearl necklace that was given her by her grandfather.

The $20 note in the Canadian Journeys Series was issued in September 2004 and features a portrait of the queen based on a photograph taken in 2000 by Charles Green specifically for this note.

The note won the first annual Banknote of the Year Award by the International Bank Note Society, who cited it as “probably the finest portrait of the mature monarch to appear on any bank note.”

Her portrait is represented in every Australian bank note series since her coronation, starting with her head in a bas-relief profile presentation on the £1 note first issued in October 1953. Decimalization in 1966 brought her image to the Australian $1 note. Here, her intaglio portrait was based on a photograph of the queen supplied for the design. The watermark on both of these notes is not of her, but of James Cook.

Australia’s move to polymer in 1992 eliminated the $1 denomination on notes, and her placement on the $5 note caused controversy. She displaced Caroline Chisholm, who was on the first $5 bank note. The Reserve Bank defended its decision, saying that the monarch’s portrait always appeared on at least one banknote, and that since Australia was still a constitutional monarchy, it remained appropriate to depict the queen on bank notes. The portrait is an interpretation of a photographic portrait by John Lawrence commissioned by the bank in 1984. The 1995 version of the note was recolored so as to distinguish it more clearly from the $10 bank note of the series. The same photograph was next used as the source for her portrait on the $5 note first issued in 2016 in the Next Generation of Banknotes series. 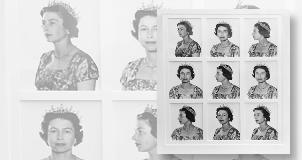 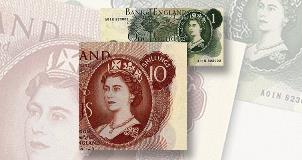