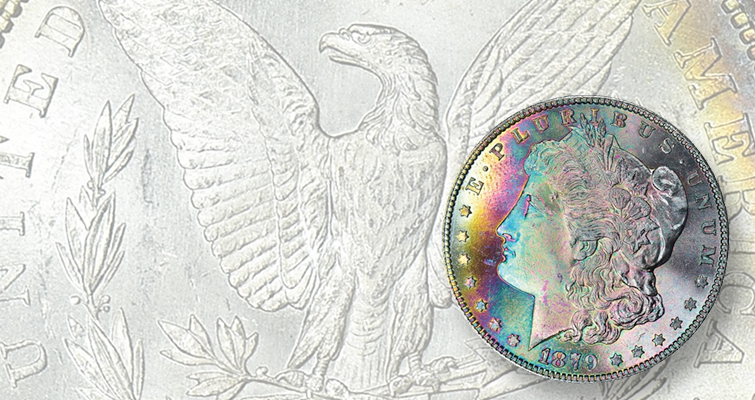 Because of the coin’s toning, a collector paid nearly $14,000 to acquire this common-date Professional Coin Grading Service Mint State 65 1879-S Morgan dollar whose published value is closer to $150. 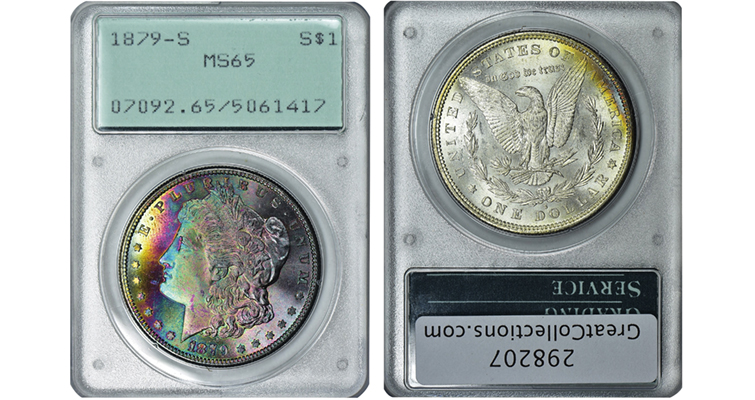 The 1879-S Morgan dollar is encapsulated in a first generation holder by Professional Coin Grading Service.

Why? Ian Russell, president of GreatCollections Coin Auctions in whose auction the coin was sold, cited the coin’s toning.

“We’ve seen a significant increase in bidding activity on toned Morgans over the past 12 to 18 months,” Russell said Sept. 10.

Eight different bidders placed 55 bids for the coin offered in the auction that closed just before 6 a.m. Pacific Time Sept. 6. The top bid was the only one recorded for the winning bidder.

GreatCollections’ auction opened Aug. 26 with an opening bid of $100.

Its obverse displays shades of gold, pink, lilac and blue toning, predominantly in the fields in front of Liberty’s portrait.

The reverse is predominantly untoned, with light to darker gold toning evidence from the F in OF down past the second A in AMERICA.

Toning is the result of a coin’s reaction to its environment, including how a coins is stored.

Toning is a natural oxidation process than can produce multiple colors on a coin’s surfaces over time. The extent of the toning and the depth of color depends on the metallic composition of the coin and environmental factors under which a coin is stored.

Aesthetically pleasing natural toning can add value to a coin, while distracting natural or artificially created toning can decrease a coin’s value.

The 1879-S Morgan dollar has a reported mintage of 9.11 million coins, which makes it common as a date.

The San Francisco Mint struck two significant subtypes or versions of 1879-S Morgan silver dollars, the result of continued experiments at the Philadelphia Mint to tweak the coin’s designs to improve strikeability in its second year of production. One of those variants of the coin is scarcer than the other major variant, though that scarcity was not a factor in the auction.

The authors estimate that 500,000 of the mintage are of the rarer Reverse of 1878 coins, while the remainder of is of the more common Reverse of 1879 subtype.

The toned 1879-S Morgan dollar from the GreatCollections auction bears the more common Reverse of 1879, according to Morgan and Peace dollar specialist John Roberts, who is the variety attributer for ANACS and author of the monthly Coin World column “About VAMs.”