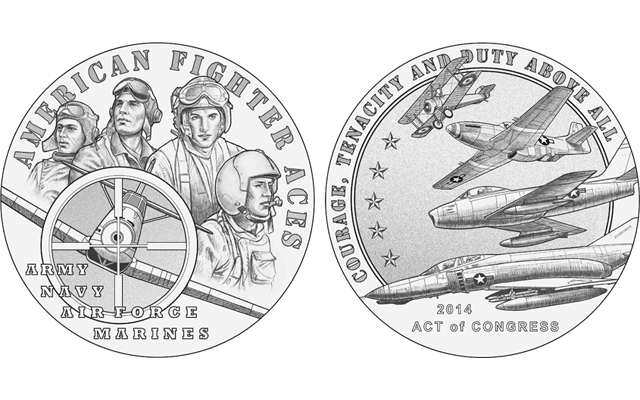 For the American Fights Aces congressional gold medal, the Commission of Fine Arts recommended Oct. 16 an obverse depicting four aviators superimposed over crosshairs in which an enemy plane is targeted. The reverse depicts U.S. aircraft flown in four major conflicts. 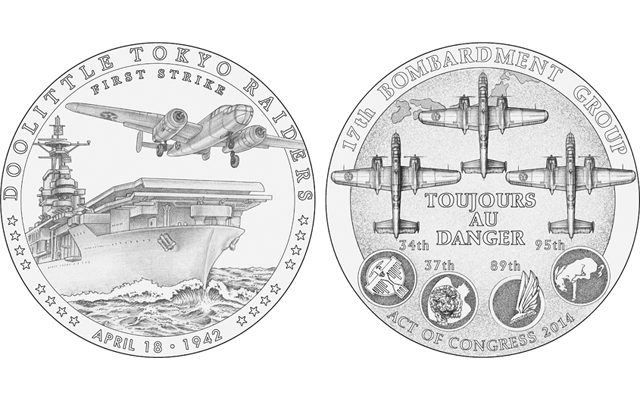 The CFA's recommended designs for the Doolittle Tokyo Raiders depicting on the obverse a B-25B Mitchell bomber taking off from the flight deck of the naval carrier USS Hornet. The reverse depicts three bombers and the patches of the squadrons that participated in the April 18, 1942, raid.

Members of the Commission of Fine Arts followed the recommendations of the two military organizations advising the U.S. Mint on congressional gold medal honoring the American Fighter Aces of four wars and the Doolittle Tokyo Raiders of World War II.

Meeting in Washington on Oct. 16, the commission said they would accede to wishes of the two advisory groups, unlike the Citizens Coinage Advisory Committee, which two days earlier recommended designs of its own liking for the two medals.

For the American Fighter Aces medal, the CFA backed a design showing four aviators positioned above an image of an enemy plane caught in the crosshairs of an U.S. airplane's gun. For the reverse, the commission selected an image showing four fighter aircraft from the four conflicts — World Wars I and II, Korea and Vietnam — under the slogan "Courage, Tenacity and Duty Above All."

For the Doolittle Tokyo Raiders, the commission urged the Treasury secretary to select an obverse design showing the aircraft carrier USS Hornet launching one of the North American B-25B Mitchell bombers on a choppy sea.

For the reverse, the commission backed a design showing three of the bombers and the patches of the squadron that participated in the April 18, 1942, raid on the Japanese mainland. It also includes the unit's motto: "Toujour au danger," which translates to English as "Always in danger."

The commission's review took less than 30 minutes and was not as detailed as the CCAC's review, which took most of a morning meeting. All of the U.S. Mint's proposed designs were sent to the commission members prior to the meeting.

April Stafford, director of the U.S. Mint’s Office of Design Management, briefed the commission only on the designs backed by the military advisory groups, American Fighter Aces Association and the Doolittle Tokyo Raiders, and those backed by the CCAC.

Stafford's approach is a change in presentations in response to the a CFA request that the Mint speed up its coin review presentations.

The Treasury secretary has the discretion to authorize the U.S. Mint to strike 3-inch and 1.5-inch bronze duplicate medals of the gold medal for sale to the public.