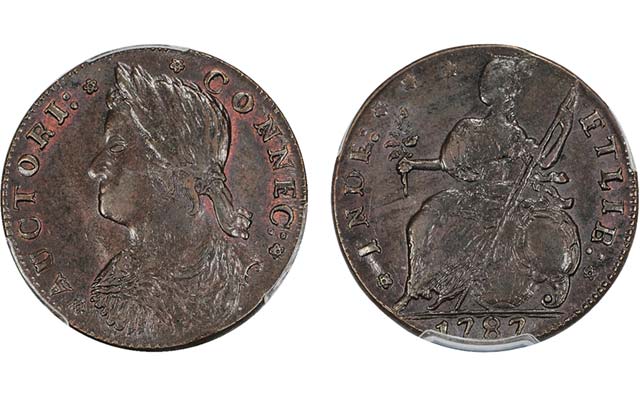 Connecticut coppers of 1785 to 1788 were purposely designed to closely resemble 18th century English halfpence, as were many other early American copper coins of the era.

Though the earliest American coins, the silver pieces struck in Boston in the 17th century, have distinctive motifs that were designed just for use in Massachusetts, their basic layout owes a lot to English contemporaries, with beaded borders around peripheral legends that surround central design elements.

Not only are the shilling, sixpence, and threepence denominations the same as their English ancestors, but even the way those denominations are expressed are the same. Look for bold Roman numerals on both the small silver coins of Massachusetts and those struck in mid-17th century England, a shorthand that was very different from the way other contemporary coins showed value.

The Lord Baltimore silver coins, struck about the same time, owe their look to the hammered silver coins of Charles I in even more direct similitude.

The most common progenitor of early American coins is the English halfpenny, easily the most common copper coin in colonial America. While Machin’s Mills counterfeit halfpence were clearly inspired by their genuine counterparts, so too were the coppers of Connecticut, most coppers struck for Vermont, and even many of the Washington coppers like the Military Bust types and the rare NON VI VIRTUTE VICI pieces. All of these feature a truncated bust in profile on the obverse, surrounded by identifying legends, and a seated allegorical figure on the reverse atop a date in the exergue. George II halfpence, struck from 1729 until 1754, depict the king facing left, just like most Connecticut coppers. The copycatting is not accidental: Worn George II coppers dominated American small change, and it was vital that the new coppers blend in if their minters were to make a profit on their production.

Similarly, Ben Franklin’s design for 1776 Continental Currency issues made it not only onto the 1776 Continental dollar, but was revived for the 1787 Fugio coppers. It was even featured on 1781 Vermont paper money, in somewhat altered form, making the point that the would-be 14th state has been omitted from the ring of 13.