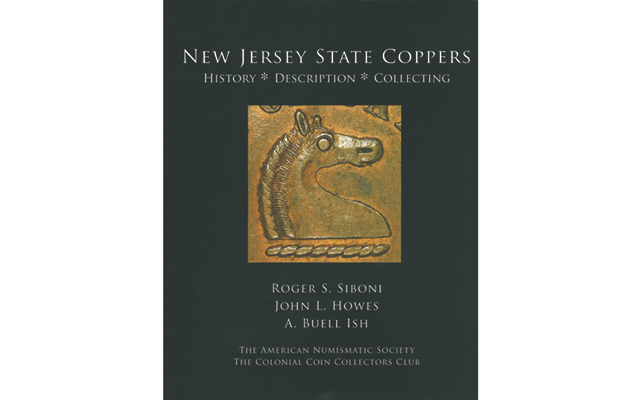 The Numismatic Literary Guild’s Book of the Year Award was bestowed in August to authors Roger Siboni, John Howes and Buell Ish for their extensively researched and illustrated reference on New Jersey coppers.

Colonial coin collectors tend to be a bookish bunch, not just by personality, but as collectors as well.

It will come as no great shock that the Numismatic Literary Guild “Book of the Year” award for 2014 has gone to a book about early American coins, the magnificent New Jersey State Coppers: History, Description, Collecting by Roger Siboni, John “Jack” Howes, and Buell Ish, co-published by the American Numismatic Society and the Colonial Coin Collectors Club.

The book is large, bound impressively and wrapped in a great-looking dust jacket. Its size (12.5 inches tall, 10 inches deep, more than 1.5 inches thick) is bigger than the standard for reference works nowadays, which may leave it as a shelf orphan, very much in the spirit of Dr. Edward Maris’ The Coins of New Jersey, whose “elephant folio” volume was more the size of a coffee table than a coffee table book.

The downside of such a production is its inevitable price. When a book retails for $235, it is almost guaranteed to be the numismatic equivalent of preaching to the choir. It’s tough to imagine someone with a casual interest in New Jerseys ever purchasing a book whose price could buy them a pretty nice New Jersey copper.

Further, the size makes the book not one to carry on a long plane ride or curl up with at the beach. Alas, with so much information, what else could have been done? Heavy editing would not have produced a better book, and multiple volume sets can be as unwieldy as a single large volume.

Beyond an extraordinary amount of information on the historical background of New Jersey coppers, their mints and the personalities involved in each, famous collectors in the series, and information on technology, each variety is studied in brilliant depth.

Discussions of die states, planchet stocks, rarity, and condition census are state of the art and will remain so for decades to come.

No book is perfect, because authors who don’t publish until they regard their manuscript as such never, ever publish. However, Siboni, Howes, and Ish have produced a work for the ages, a true standard reference, one that absorbs the common wisdom of generations while covering new ground.

So many references either try to be revolutionary or confirmatory. This book strides that line, introducing well-defended new research while throwing no babies out with their bath water. It is hard to conceive of anything the authors omitted, or a single way the authors could have produced a better book on their subject. This is a book that is required reading for every Colonial coin enthusiast.