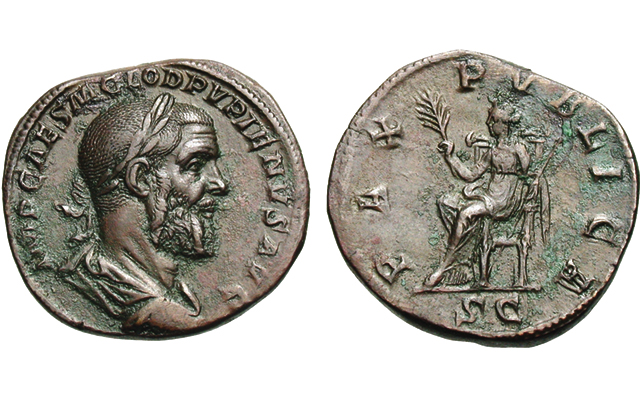 Collectors fear that the U.S. State Department may extend import restrictions to include many Roman Imperial coins, such as this sestertius of Roman Emperior Pupienus from 238 A.D. that brought $3,737.50 at a 2011 Heritage auction.

Specifically, the committee will review the proposal to extend the “Memorandum of Understanding Between the Government of United States of America and the Government of the Republic of Italy Concerning the Imposition of Import Restrictions on Categories of Archaeological Material Representing the Pre-Classical, Classical, and Imperial Roman Periods of Italy.”

A MOU between the United States and Italy first authorized import restrictions on certain Italian cultural artifacts from the Pre-Classical, Classical and Imperial Roman periods in 2001. This MOU was extended in January 2006, and in 2011, the renewal was expanded to include import restrictions on certain Greek, early Republican and Provincial coins from the early Imperial period. Coins had been excluded from the 2001 MOU and its 2006 renewal.

Attorney Peter Tompa, a board member of the Cultural Policy Research Institute and the Ancient Coin Collectors Guild, fears that the MOU may be expanded to include Roman Imperial coins, which he characterizes as the “heart of ancient coin collecting.”

The effect of the import restrictions is that certain “coins of Italian types” may be imported into the United States only if accompanied by either an export permit issued by Italy or other documentation indicating that the coins left Italy prior to the effective date of the restriction.

The MOU will remain in force for a period of five years, when it be considered for renewal. Although the CPAC has no decision-making authority, and ultimately the State Department has the exclusive authority to make the final decisions, CPAC recommendations are typically followed by the government.

Tompa hopes that collectors speak up. He said, “We hope Roman Imperial will not be included, but last time around, an official Italian representative, egged on by American archaeologists, asked for them to be added. Without collector outcry, silence may be taken as acquiescence.”

Import restrictions limit the ability of American collectors and dealers to legally import certain types of coins that may be legally available in other countries.

Tompa notes that the import restrictions “have drastically limited Americans’ abilities to purchase historical coins from abroad and have negatively impacted the cultural understanding and people to people contacts collecting fosters.”

Those with an opinion are invited to make comments electronically, via the Federal eRulemaking Portal online at www.regulations.gov. To make a public comment, enter the Docket No. DOS-2015-10, and follow the prompts to submit a comment no later than 11:59 p.m. (EST) on March 20.

The meeting is scheduled for April 8 to 10 at the U.S. Department of State, Annex 5, 2200 C Street N.W., Washington, DC, 20037. An open session to receive public comment on the proposal to extend the MOU will be held April 8 beginning at 9:30 a.m. Parts of the meeting will be closed to the public.

As of the afternoon of March 10, 154 comments have been received and posted with nearly all of them opposing both the renewal of the MOU and the possible expansion to include Roman Imperial coins.

On Feb. 24, Paul Fly wrote: “Enough is enough, we are no longer the land of the free. “He added: “At a minimum, please free all ancient coins from restriction. Such coins are openly and legally available for sale worldwide, including within Italy itself. It makes absolutely no sense to continue to restrict American access to what Italians themselves have enjoyed since the Renaissance.”

His comments were similar to many who wrote that the coins included in import restrictions circulated throughout Europe, the Middle East and beyond.

Jared Clark wrote on March 9: “It is important to note that it is typically impossible to verify the original source of many Roman and Greek coins. Roman and Greek coins are extremely common and widely and legally available for sale around Europe, Africa, and Asia. These restrictions will negatively impact my studies as a student, hobby, and cultural appreciation of Italian ... history. Please refrain from passing these restrictions.”

On March 3, Nicholas Molinari posted: “Ancient coins are almost always found in hoards far outside of major archaeological sites, and in most cases traveled far beyond the borders of the issuing authority. Please do not include ancient coins in the renewal of the MOU with Italy. No European country, including Italy (where ancient coins are openly traded), is subject to such oppressive restrictions. My legitimate academic research will be seriously delayed if the Italian MOU continues to include ancient coins.”

Many comments were specifically opposed the extension to include Roman Imperial coins. Rob Ward wrote on March 9, “I oppose the extension of this MOU to Roman imperial coins, because it would deprive young people of the opportunity that I and countless others have had, to pursue their interest and develop their appreciation of ancient culture and society.”

While there were few comments in favor of the restrictions, a Jan. 19, 2011, press release from the U.S. State Department stated the interest in passing the MOU.

In explaining the reasoning for the MOU it stated, “Coins, a significant and inseparable part of the archaeological record, are especially valuable to understanding the history of Italy. The unauthorized search for coins in Italy is exacerbated by metal detecting, an activity that is destructive to fragile archaeological deposits.”