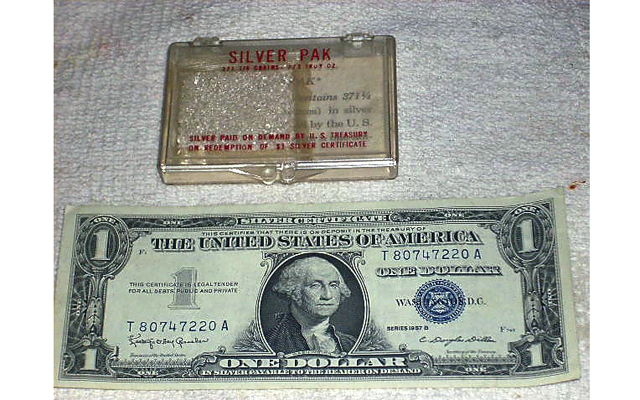 Silver certificates between March 1964 and June 24, 1968, were exchangeable at U.S. Assay Office facilities for silver bullion granules. The plastic box containing the granules does not resemble packaging used by the U.S. Mint.

If possible, can you tell me more of the history of these Silver Pak items and whether there were other U.S. Treasury varieties?

I have seen “Pellet” silver style vials with generic labels. None I have seen, except for possibly in a coin shop with my dad in the early 1960s, come even close to the Silver Pak’s look and authenticity. I have enclosed pictures of mine.

I have only seen four of these. I would like to have a few more, but I cannot find anybody selling! Whatever you can tell me about these item(s) will be greatly appreciated.

It’s possible that while the silver granules in the reader’s Silver Pak could have come from the Treasury stockpile, the packaging may be from a private enterprise.

Gillio said he redeemed hundreds of thousands of silver certificates at the San Francisco Assay Office in 1966 and 1967, for which he received silver bullion for resale.

For large numbers of notes redeemed, the government paid out bullion in the form of large flat, rectangular bars, with the weight in troy ounces written in black grease pencil. No weight, fineness or bar number was stamped into each bar, Gillio said.

Those who redeemed just a few notes were presented separate little plastic bags containing $1 in silver granules for each $1 in notes redeemed. Each $1 silver granule packet contained 0.773 troy ounce of pure silver, the amount of silver in a standard U.S. silver dollar.

Small silver bars in various weights and stamped with the seal of the San Francisco Assay Office were paid in exchange for scrap silver for melting, according to Gillio, and not for silver certificate redemption.

Up until March 1964, silver certificates could be redeemed on demand, exchanged for silver dollars. After that date and until June 24, 1968, redemption was in exchange for silver bullion from the nation’s strategic silver stockpile. Passage on June 4, 1963, of Public Law 88-36 repealed the Silver Purchase Act of 1934 and confirmed the redeemability of silver certificates for silver dollars or bullion at the monetary value of $1.2929 an ounce.

The silver certificates could be redeemed for the silver granules only at the U.S. Mint’s Assay Offices in New York or in San Francisco.