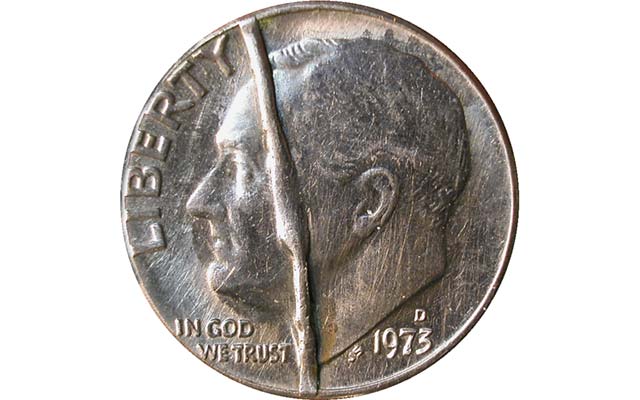 This 1973-D Roosevelt dime was struck by an obverse die with a very wide split. Its average width is 0.75 millimeter. 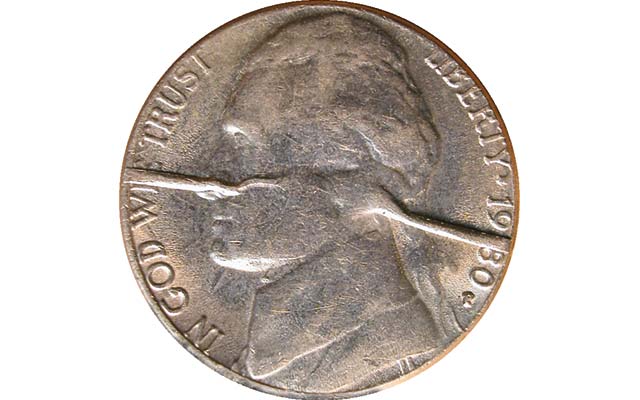 An impressive split die error adorns the obverse face of this 1980-P Jefferson 5-cent coin. Its average width is 0.75 millimeter. 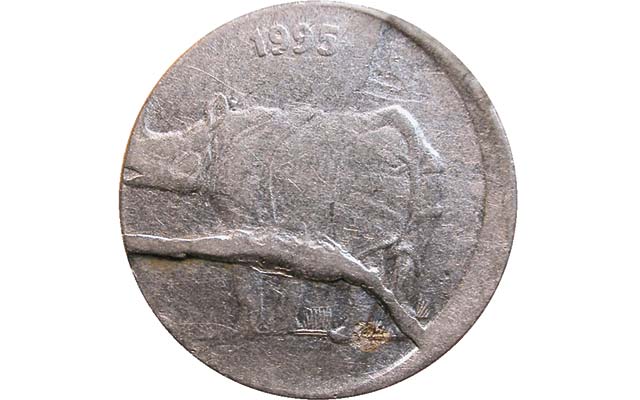 An asymmetrical split with a kinked pathway decorates the reverse face of this 1995 25-paise coin of India. It measures 0.8 millimeter in width. 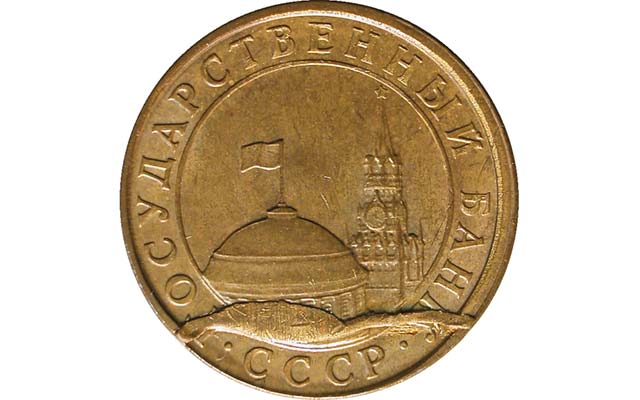 A highly asymmetrical split runs across the southern half of this 1991 10-kopek coin of Russia. Its average width is 0.7 millimeter.

For those who collect split dies, the wider the chasm, the better.

A split die is a die crack that has propagated deep into the die neck and die shaft, allowing the sides of the crack to spread far apart. It appears on a coin as a conspicuous ridge that extends between two widely separated points on the rim/edge junction.

The placement and course of a split varies considerably. A median or bisecting split divides the die face into two equal halves. An asymmetrical split leaves the die face divided into two unequal portions. A split can be straight, curved, kinked, or irregular in its pathway.

There must naturally be a limit as to how wide a split can get before one side breaks off. That limit is determined by the depth of the split, the stiffness of the die steel, and how much bending stress the steel can withstand before breaking. As a practical matter, the limit can be determined only by measuring the dimensions of the very widest splits.

In pursuit of this answer, I measured the widths of four impressive split die errors from three countries. I used an ocular micrometer that is accurate to the nearest tenth of a millimeter.

The first example is a 1973-D Roosevelt dime that I recently obtained from error dealer Jon Sullivan. Almost straight and slightly asymmetrical in position, the split runs from 11:30 to 6:00 (obverse clock position). The spreading die face left the letters of LIBERTY hugging the coin’s edge while, on the right side, the design rim persists as a thin remnant.

The widest portion of the split is located over Franklin Roosevelt’s cheek, but any measurement taken here would be deceptively large, as it coincides with what appears to be an interior die break. The edges of a split have a tendency to chip, especially in the center of the die face. Extensive chipping may result in the formation of an interior die break that straddles the split. In other cases, metal on either side of the split’s midpoint sinks in, generating a die subsidence error. The resulting swelling on the coin will also create the appearance of excessive width.

I therefore chose to measure the two ends of the split, which appear to be clean, original fractures. At 11:30 the split measures 0.7 millimeter, while at 6:00 it measures 0.8 millimeter. This is the widest split I’ve seen in a dime, matched only by a 1965 dime struck by a split obverse die.

The next coin — a 1995 25-paise piece from India — was struck by a badly split, horizontally misaligned reverse (hammer) die. The split occupies a highly asymmetrical position in the southern half of the reverse face. It pursues a relatively straight path except for a short downward bend on the right. An elongated interior die break prevents accurate measurements along the split’s middle portion. But once again, the ends of the split are free of such secondary breakage and both measure 0.8 millimeter in width.

Our final example is a 1991 10-kopek coin of Russia. An asymmetrically positioned split appears in the southern hemisphere of the obverse face, which I suspect was struck by the hammer die. An elongated interior die break straddles the left side of the split, but does not extend to its left terminus. The left end of the split measures 0.6 millimeter while the right end measures 0.8 millimeter.

Even though this sample of exaggerated split dies is small, the close similarity in their measurements suggests that they’ve reached the upper limit for spread. That upper limit doesn’t seem to be related to the overall diameter of the die face and die neck. Therefore, while the absolute measurements of the splits are similar, they are proportionally widest in smallest denominations.

The widest splits seem always to be associated with the hammer die. This makes a degree of sense, since the anvil die is confined by the collar, and the latter would tend to limit spread.

If any reader comes across a split that measures a millimeter or more in width, please let me know.