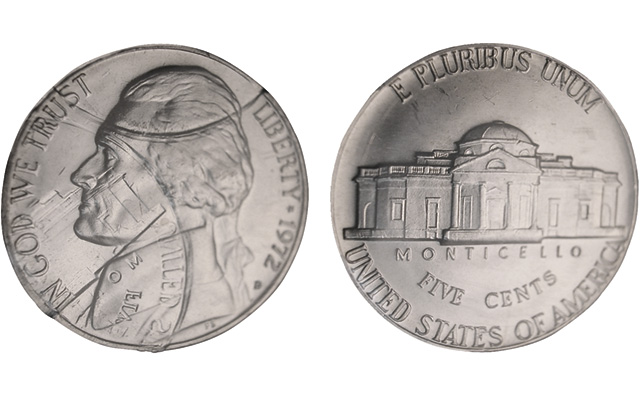 Ensconced in a Denver Mint set, the 1972-D Jefferson 5-cent coin displays an in-collar double strike with a low-pressure indent and partial brockage visible on the second strike. On both faces, areas lying beyond the two sunken impressions received no direct contact from the two dies (i.e., an invisible strike). In the photos, the coin is tilted to avoid glare from the enveloping plastic. Images by Mike Diamond. 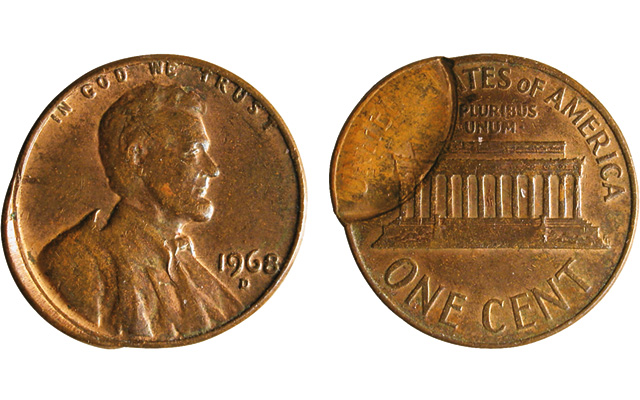 This 1968-D Lincoln cent features an out-of-collar second strike that includes a low-pressure indent on the reverse face and an invisible strike.

Low striking pressure can be caused by a precipitous drop in ram pressure (the tonnage applied to a planchet of normal thickness). However, most low-pressure (weak) strikes seem to be caused by a dramatic increase in minimum die clearance, a term that refers to the closest approach the dies make to each other in the absence of a planchet.

In a low-pressure indent or partial brockage, there is little or no expansion of the indented metal despite the aggregate double-thickness within the striking chamber. Ordinarily, an intrusive coin or planchet will greatly elevate effective striking pressure, causing significant lateral expansion of the indented metal (if the disc is struck out-of-collar) or dramatic finning and horizontal lipping beneath the indentation (if the disc is struck in-collar).

Invisible strikes are often associated with low-pressure indents and partial brockages. An invisible strike occurs when minimum die clearance exceeds the thickness of a planchet. In such circumstances an unaccompanied planchet will remain unstruck. However, if a second planchet or a coin intrudes into the striking chamber, it takes up enough excess space to allow a die-struck design to form on the face opposite the indent or partial brockage. The rest of the planchet remains unstruck.

In the Denver Mint, low-pressure multi-errors of the sort just described became somewhat more common during the Nixon era (1968 to 1974). A respectable number of 5-cent coins and dimes feature such errors, with 5-cent coins dominating. Denver Mint quarter dollars with such errors seem primarily restricted to the year 1973. Half dollars carrying the D Mint mark came late to the game (possibly no earlier than 1974) and also stayed later (at least until 1977).

A rather fetching example of such an error is presented here. It’s a 1972-D Jefferson 5-cent coin with an in-collar double strike and no rotation between strikes. The first strike was normal while the second strike features a 20 percent low pressure indent at the coin’s northern pole and a 40 percent low-pressure partial brockage on left side of the coin. Remarkably, this coin belongs to a Denver Mint portion of an Uncirculated Mint set and still resides in its plastic pocket. The planchet responsible for the indent would have ended up as an off-center strike with an unexpanded (“mirror”) brockage of the obverse design on its reverse face. The coin responsible for the partial brockage would have received an off-center second strike with an unexpanded brockage of the obverse design overlapping the original raised reverse design.

It’s not clear why these types of errors proliferated during this narrow time period. I can only assume that a modification was made to some of the Denver Mint presses that increased the likelihood of such errors. Since these errors are almost the exclusive province of 5-cent coins and dimes during the first six years of the phenomenon, it seems that these modified presses were used primarily for these two denominations. Use of these modified presses then seems to have expanded to quarter dollars in one year only (1973), while their final application was consigned to the half dollar denomination.

Another intriguing pattern is that, in 5-cent coins and dimes, low-pressure indents and brockages most often occurred when two previously struck coins overlapped. This may be due, in part, to the use of dual and quad presses for these denominations. In quarter dollars and half dollars, these errors most often involve an overlapping coin and planchet.

Perhaps the oddest pattern is that the denomination produced in greatest abundance — the cent — seemed for the longest time to have been immune to this sort of error during the period of time under discussion. This drought was recently broken by my acquisition of a double-struck 1968-D Lincoln cent. The first strike was normal. The second strike occurred out-of-collar, and with a planchet inserted between the coin and the reverse (anvil) die. That second strike generated a low-pressure indent on the reverse face, an opposing oval of die-struck design on the obverse face (containing Lincoln’s shoulder), and an invisible strike elsewhere.

Both strikes were delivered by the same die pair, as the close positioning of the two strikes would imply.