Collector seeks information about medal for 1909 Fair in London 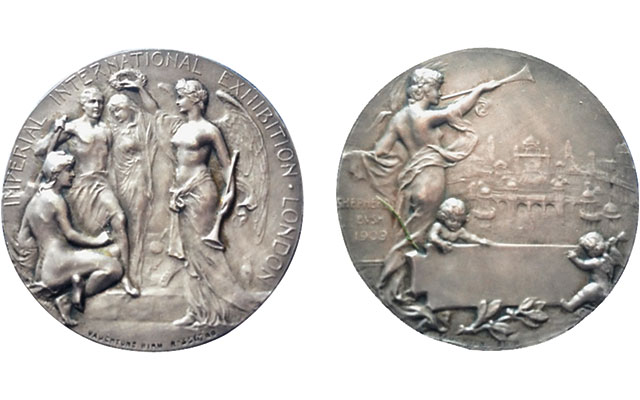 A 1909 medal of uncertain metallic composition was issued to celebrate the 1909 Imperial International Exhibition in London.

The medallion on the obverse states “Imperial International Exhibition London,” and on the reverse it states “Shepherd BVSH 1909.”

The medallion appears to be sterling silver in composition. Can you give me information on this medallion.

The Imperial International Exhibition was held in the White District section of Shepherd’s Bush, in west London, in 1909.

It was the second exhibition on the grounds. The 1909 “world’s fair,” celebrated the imperial achievements of the Triple-Entente Powers: France, Russia, and Britain.

At one time, exhibitions and “world’s fairs” were rather popular, and many medals were issued for the events or to be used as prizes.

The reader’s medal could be silver-plated, silver or merely “white metal.” A specific gravity test would confirm which of those options is correct. A Dix Noonan Webb auction from May 10, 2007, and Victoria & Albert Museum archives list a gold-plated silver version.

The obverse of the medal shows an allegorical scene of Victory crowning a craftsman, and the reverse depicts a female figure blowing a trumpet over a view of the exhibition buildings (the white buildings gave the area its “White City” name). Also on the reverse are two putti (chubby male children) holding an engraved plaque.

Auction records for the piece are scant, so finding a meaningful value is a challenge. The medal is not listed in Christopher Eimer’s British Commemorative Medals, likely due to space considerations (the Eimer work, updated in 2011, is not intended to be exhaustive).

The example sold in the Dix Noonan Webb auction realized £172.50 ($343.60 U.S.), including 15 percent buyer’s fee, but it was engraved for presentation as an award, and it may have a different value than a medal not engraved, like your example.