Collector designs medal honoring his co-regent of their home 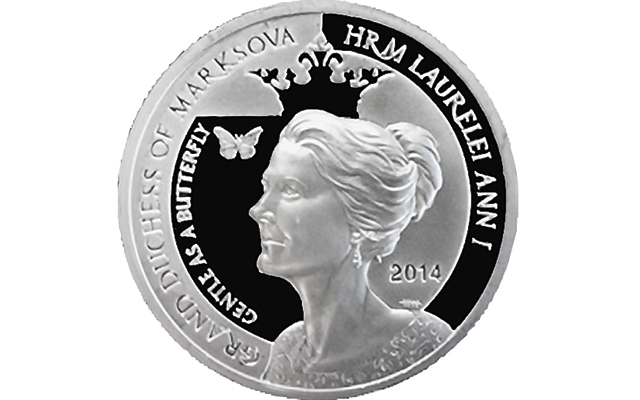 So much about coin collecting occurs in the home, from searching rolls to reading hobby publications.

For Gary Marks, chair of the Citizens Coinage Advisory Committee, home is more than his castle: It is his country, and where his wife, Laurie  — Grand Duchess of Marksova, to be exact — serves as the co-ruler.

Like many Coin World readers, Gary has a passion for collecting. Last year he called on that passion to help design a “coin” in honor of Laurie, replete with its own “Certificate of Authenticity.”

The certificate reads, in part: “The Royal Mint of Marksova proudly introduces the 2014 Silver Duchess One Numi Coin [that] pays tribute to a real person, Laurie Ann, who forever reigns in the heart of the man who conceived and commissioned this coin.”

The certificate also credits medallic artist and CCAC member Heidi Wastweet for designing and sculpturing the obverse, which “captures the enchanting beauty and kind spirit of the beloved Grand Duchess.”

Marks designed the reverse, which features a heraldic eagle, with the Marks family crest as its shield.

To make a fantasy piece like this, you need a design and then a sculpture of obverse and reverse for a three-dimensional vision. Gary approached Heidi last summer.

Once the designs and sculptures were finished, Gary used BEX Engraving in Fullerton, Calif., to manufacture the final product.

Laurie opened the gift in December, during the 2013 holiday season. At first she didn’t recognize her profile, but slowly it dawned on her, and then she was “overwhelmed.”

“We have been married 31 years,” she said. “You can forget sometimes how much you really love each other. I know now how deep his love for me is.”

When you live with an artist, she adds, you also live with his or her passion. “Sometimes that makes you wonder where you fit in.”

She said the metallic tribute “renewed our relationship. Because it is displayed in the house, I walk by it frequently and always look at it when Gary is not at home,” especially when he travels to CCAC meetings.

Gary has collected coins since 1973. He had to sell some of his collection to afford to make the new medal. “This coin is the most precious in my collection and always will be,” he says.

What better way to honor the woman or man in your life than with a metallic commemoration?