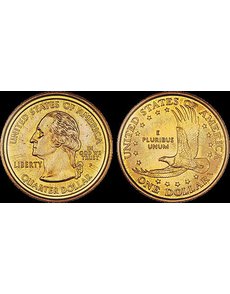 New Mexico collector Tommy Bolack has added a ninth example of the double-denomination State quarter dollar/Sacagawea dollar mule error to his stable from 14 examples publicly identified, and is seeking a 10th coin.

It has not yet been determined whether the 10th example Bolack is seeking is one of the 14 known examples or a previously unreported coin.

All of the 14 known pieces have been graded and encapsulated either by Professional Coin Grading Service or Numismatic Guaranty Corp. Neither grading service keeps a tally of specific error coins.

Bolack purchased his latest coin Jan. 10 for $88,125 in the Heritage Auctions’ sale held in conjunction with the Florida United Numismatists convention in Orlando. The price includes the 17.5 percent buyer’s fee added to the final hammer price of each lot won.

The coin was struck from Die Pair I. Numismatists have identified three die pairs used in the production of the mule errors.

Bolack has been diligent about acquiring as many of the mules as possible, though he is not always successful when an example enters the marketplace.

He said he missed the opportunity to acquire an NGC MS-67 Die Pair 1 example that sold Aug. 9, 2012, by Stack’s Bowers Galleries for a record $155,250 in conjunction with the American Numismatic Association’s World’s Fair of Money in Philadelphia. Bolack intended to bid in that auction, but missed the phone call from the Stack’s Bowers representatives preparing to take his bids.

The record-setting coin was one of two mule errors in a two-coin submission to NGC for certification in March 2005, according to Coin World research. Both examples were certified by NGC as grading MS-67 and being struck by Die Pair I.

One of the two coins was submitted to the Stack’s Bowers Aug. 9, 2012, Rarities Night auction session. The whereabouts of the second coin from that submission is unknown.

Bolack said he has not yet been able to determine whether the example he has been offered and is negotiating to buy is the second example from that two-coin submission, or a previously unreported piece.

What could become Bolack’s 10th example of the double-denomination mule is being offered in a group along with other error coins. Bolack said he is interested only in the mule.

Bolack has acquired all nine of the mule errors he currently owns from auctions or through private transactions.

Background of the coins

A mule error is a coin that combines an obverse and reverse not intended to be paired with one another.

? Die Pair 3: For Die Pair 3 of the mule, the obverse has been described as “fresh and frosty.” The obverse of the Die Pair 3 coins shows just a hint of the radial lines found on the discovery example. A small die gouge appears in front of Washington’s lips. The reverse appears perfect and exhibits no die cracks. ¦