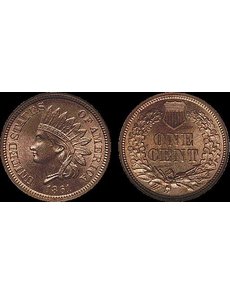 An 1861 Indian Head copper-nickel cent is a quintessential Civil War U.S. coin. This exceptional Mint State 65 example with a green Certified Acceptance Corp. sticker sold for $1,265 at a May 31, 2012, auction.

For U.S. coin collectors, the Civil War provides collecting opportunities for all budgets. If there’s a single coin type that’s symbolic of the era, it’s the Indian Head copper-nickel cent.

The Indian Head cent debuted in 1859, and in 1860 its reverse was modified with the adoption of a different wreath and addition of a shield. Indian Head copper-nickel cents are occasionally referred to in old literature as “white cents” or even “nicks” because of their tan color. In the later part of 1864, the copper content was increased and nickel removed entirely, and the bronze Indian Head cents of 1864 and after regained a familiar copper color.

The cent was a workhorse denomination in the mid-19th century. The Philadelphia Mint struck more than 10 million cents in 1861, increasing that number to more than 28 million the next year and nearly 50 million in 1863, yet hoarding was still rampant. In 1864, when the composition switched to bronze, more than 52 million Indian Head cents of both alloys were struck.

Today, Civil War era cents are widely available and, in Good 4 condition, a six-coin 1861 to 1865 set of Indian Head cents, including both 1864 alloys — one in bronze and one in copper-nickel — can easily be assembled for less than $100.

For a collector looking for a great type coin, nice About Uncirculated 58 cents, especially the 1862 and 1863 coins, can be found for under $100.

The 1861 Indian Head cent is exciting, representing the first year of the Civil War, and it has a relatively low mintage compared to later Civil War Indian Head cents. A handsome Mint State 63 example realized $352.50 at a Dec. 1, 2012, auction, while a gorgeous MS-65 example with a green Certified Acceptance Corp. sticker indicating quality in the grade brought $1,265 last year at a different Heritage auction.

Also collectible are Civil War tokens. These thin copper tokens were privately issued and are generally cent-sized. As hoarding of regular issue coins reduced merchants’ abilities to make small change, these tokens served as substitutes. Congress responded by passing a law in 1864 forbidding private individuals from issuing metallic objects “intended for the use and purpose of current money.” These tokens enjoy an active following today and circulated examples can be found for less than $20. ¦