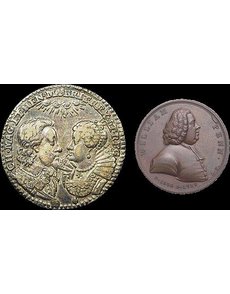 Maryland is named for Charles I’s wife, Henrietta Maria, shown facing her husband on the obverse of a 1625 marriage medalet. William Penn, for whom Pennsylvania is named, can be found on many medals.

Looking at a map of the states that evolved from the original 13 Colonies, it’s pretty clear that two major sources of place names can be identified in the eastern half of the United States: modern renderings of Native American words, and persons and events of the 17th and 18th centuries.

With plenty of coins and medals depicting these people and subjects, “collecting the map” can be a fun way to connect interest in numismatics and geography.

Of the original 13 Colonies, the namesakes of nearly half can be found depicted on a coin or medal of the era.

Georgia was named for King George II of England, a man whose visage is easy to find on copper, silver, and gold coins in nearly every price range and condition.

The Carolinas were named for King Charles II, Carolus in Latin, who reigned from 1660 to 1685. His portrait is also easy to find on coins and medals of the era, including some that commonly circulated in early America.

Queen Elizabeth I, the Virgin Queen, inspired the name of Virginia. Sixpences and shillings with her portrait circulated widely among the first settlements there (as did coins depicting King James I, the namesake of Jamestown, and King William III, for whom Williamsburg was named).

Maryland was named not for William III’s wife, Mary, but Charles I’s wife, Henrietta Maria, the mother of future kings Charles II and James II. While she was never depicted on coins, her visage is seen on a 1625 marriage medalet, facing the portrait of her husband.

As for the founder of Pennsylvania, William Penn, he has been depicted on hundreds of medals over the years. The only one to have been produced during the Colonial era was the memorial medal engraved by Lewis Pingo in 1775 at the behest of the Penn family, cataloged as Betts 531 in American Colonial History Illustrated by Contemporary Medals by C. Wyllys Betts.

After collecting the namesakes of the Colonies, a collection like this could get as specific as desired. Someone in New Hampshire might wish to find a 1766 Pitt token to commemorate the naming of tiny Stamp Act Island within Lake Wentworth, a 1758 medal of Adm. Edward Boscawen to mark the namesake of the town of Boscawen, N.H., or even the 1760 medal depicting Gen. James Wolfe, for whom Wolfeboro was named. A North Carolina collector could easily find medals depicting Charlotte, the wife of George III. Someone from Pennsylvania could gather medals depicting William Pitt, for whom Pittsburgh is named.

From counties, to rivers, to towns, a collector is limited only by imagination and how good his or her atlas is. Once you start looking, you may find that every road sign evokes another numismatic connection.