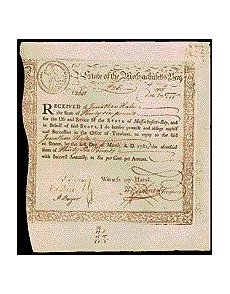 Mark Twain once said, “Better a broken promise than none at all.” If he collected Colonial Americana with that thought in mind, he probably would have collected early American fiscal paper.

Raising money for state governments was a pretty tough challenge during the American Revolution. The amount of real money in people’s hands was severely constrained, and by midway through the war it became plainly obvious that further issues of paper money were of little use, since the paper was devaluing more rapidly than it was being issued.

For several of the nascent states, the answer was to issue other kinds of noncirculating fiscal paper. You can call them Treasury certificates, or warrants, or bonds, but they were pretty much all the same thing: IOUs that turned out to be little more than broken promises.

Given the problems getting paper money to circulate at a fixed value during the Revolution, states issued loans as noncirculating certificates. Since they were payable to the bearer in most cases, they could pass as a medium of exchange, but they were not designed to be a circulating medium. Typically, their noncirculating nature meant that they could be larger and fancier, and thus offer a more interesting visual treat for modern collectors.

Massachusetts issued the most famous issues, including the legendary 1775 King Philip bond engraved by Paul Revere and the Sword in Hand bond of 1777, based on a design by Revere but engraved by Nathaniel Hurd. Another famous Massachusetts bond issue, the Commodity Bond of 1780, is best remembered for its unique valuing concept: in an era of grave inflation, it promised a future value pegged to the value of various staple commodities like beef, corn, wool and shoe leather — a literal “basket of goods” long before modern economists starting using the term!

In the days after the Revolution, speculators developed an active market for these issues, often combing the countryside to buy them from destitute veterans who received them in lieu of pay, and then selling them to the urban rich. This market created the famous exchange under the Buttonwood Tree in downtown Manhattan, which evolved into the New York Stock Exchange in 1792. State bonds were largely converted to federal securities by virtue of the Funding Act of 1790, part of the compromise that placed the national capital on the Potomac.

The most readily collected Revolutionary era fiscal paper is from Connecticut. Thanks to a wholesale disposal of the state archives during the 1960s, thousands of these notes are on the market and can be collected beginning at prices as low as $50. Massachusetts notes, far rarer but still widely available, are often priced between $300 and $500. With relatively light competition today, it’s an era of the market ripe for greater — excuse the puns — interest and appreciation.