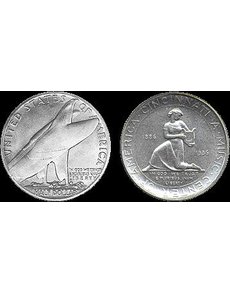 Shown are the reverse images for the Cincinnati Music Center and Bridgeport, Conn., Centennial commemorative half dollars.

Hobbyists collect early commemorative coins because they celebrate popular or historic occasions, while others enjoy the series because, for certain coins, individuals or events depicted have only tenuous historical connections.

Two such coins — the 1936 Cincinnati Music Center half dollar and 1936 Bridgeport, Conn., Centennial half dollar — fall into that latter category. However, for these two coins, each displays something else special that might appeal to hobbyists.

The Cincinnati coin was minted to honor the city’s 50th anniversary as a center of music. But folks have a difficult time knowing what, precisely, happened 50 years prior to earn that distinction.

Moreover, the obverse features a bust of American songwriter Stephen Foster, known for such folksy tunes as “Oh! Susanna” and “My Old Kentucky Home”; Foster is depicted on the coin despite having spent only a very brief time in the Ohio city.

The commemorative originally appeared in a three-coin set, featuring Philadelphia, Denver and San Francisco Mint pieces, with a low mintage of 5,000, selling for $7.75 (or about $123 in today’s money), at a time when the average yearly income was $1,700.

Worse, promoters purportedly held back thousands of the sets, creating demand, and then sold sets for as high as $50 each, or $795 in today’s cash.

Unlike the Cincinnati half dollar, the Bridgeport coin celebrated something of a bonafide occasion, the 100th anniversary of the city’s charter in 1836. The Bridgeport coin, too, depicted an individual who, while linked to the community, played no role in the event being commemorated.

The coin’s obverse shows former mayor and showman P.T. Barnum, credited with saying, “There’s a sucker born every minute.” Odd to associate that with a U.S. coin, no? Normally we anticipate individuals on coins known for more positive sayings.

The Cincinnati and Bridgeport coins display intriguing art-deco designs, which appeal to many hobbyists today, and both are affordable.

A low-Mint State Cincinnati half dollar costs about $300, rising to $700 in MS-65, according to Coin Values. Bridgeport half dollars sell for about half of those amounts.

While stories about these coins still entertain, their designs are remarkable because both sculptors did something special artistically that differs from other circulating or commemorative U.S. coinage. They stacked the official mottoes IN GOD WE TRUST, E PLURIBUS UNUM and LIBERTY in a specific order on top of each other, in small font on the reverse, making room on the planchets for the allegorical eagle and musical figure.

Editor's note: An editing error resulted in the misspelling of Henry G. Kreis' last name in an earlier version of this column.