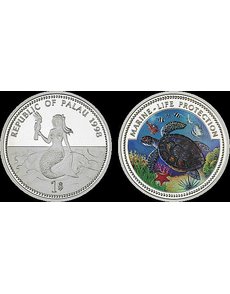 Palau’s coins like this 1998 dollar are well known for two things — the mermaid and the mint-colored sea life reverses. Palau’s first issue in 1992 was also the first commemorative coin with color. 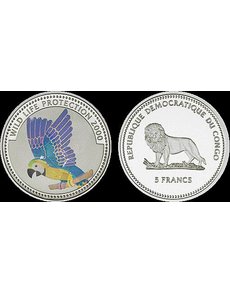 This 2000 Parrot issue in the Wildlife Protection series from the Democratic Republic of the Congo has holographic colorization, as opposed to an enamel-type color. Nowadays, such holograms are referred to by some issuing mints as “prisms.” 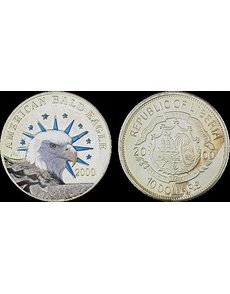 Since this enameled Liberian coin was sold and distributed only through a third party called Collector’s Showcase International, there was some confusion about whether or not the colorization was an aftermarket process. The coin is actually mint-colored. 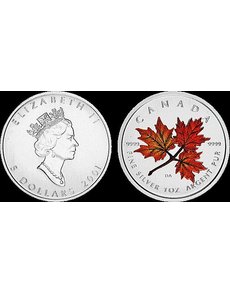 This 2001 Royal Canadian Mint colored coin is part of a series of Maple Leaf bullion coins representing different seasons. This is the Autumn coin with the maple leaf colored in vibrant shades of rust, orange and red. 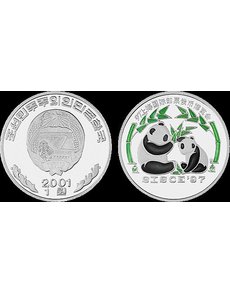 North Korea was pandering to Panda coin collectors when it issued this 2001 colored aluminum commemorative coin. It commemorates the Shanghai Coin Show and the long-running popular Chinese panda coin series. 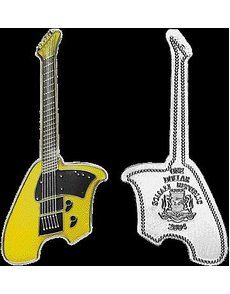 Since 2004, collectors have been snapping up enameled Somali Republic dollar coins shaped like motorcycles, automobiles and guitars, like this 2004 Yellow Klein guitar piece. 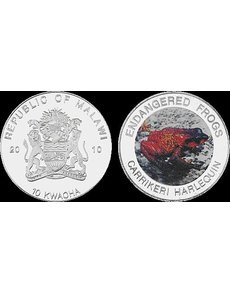 Some color coins like this one feature appliqués that look like miniature photographs. Endangered colorful frogs became the subject of a coin series from Malawi in 2010. This silver-plated 10-kwacha coin showcases the carrikeri harlequin from Colombia. 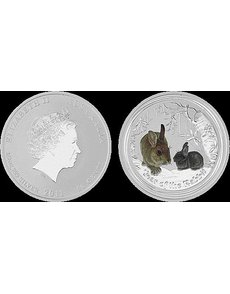 Along with color, Australia’s 2011 Year of the Rabbit half dollar bullion coin employs varied engraving depths and finishes, to enhance detail in the environment around the rabbits.

Mint-colorized coins are a worldwide phenomenon that has yet to come to the United States Mint.

The United States has never minted a colored coin, but more nations are doing so every year since the first issue 21 years ago. Plenty of the coins now exist to make this a topical specialty. Most are commemoratives but some are bullion and circulation issues too.

Uneven quality remains a problem. At the top end are the issues from nations like Canada, China and Australia that are advancing the technology while using creative and culturally logical designs. There are also unique, hand-colored issues, like the 1994 flora and fauna series of Cuba and the Bulgarian Fairy Tales series that began in 2011. These pay homage to the ancient system of enameling by putting different colors into cells on the coin’s surface. The result is a true miniature painting.

A quality color coin is a marriage of color and metal, not a weekend holiday. Some world mints take shortcuts with the process, using plasticized appliqués that appear to perch atop a coin instead of fusing color to surface. Of course, the whole concept is only 21 years old, young by any standard.

Coin Invest Trust, a private mint in Liechtenstein, developed the original process for coloring coins and applied this for the first time in 1992 to the first-ever coins of Palau, a Pacific island nation. (Technically, however, Palau was not independent from the USA until May 1994.) Palau has issued color coins annually ever since.

In 1993, Uganda and Equatorial Guinea offered their first colorized commemoratives.

Coin Invest Trust’s website currently lists the names of 28 different nations for whom the firm is currently selling commemorative coins, many of which have at least one color series.

Canada was the first nation to issue a colorized circulating coin, the Poppy 25-cent piece, in 2004, and in 2013 is offering a dozen colored commemorative coins. Since 2001, its annual colored Maple Leaf silver bullion coin has been popular because of realistic and bold color palettes. The 2001 Autumn Leaf coin features rust, orange and red colors.

Australia has also been creative with technology and issues many color coins. In 2011, Australia used color and silver to enhance a commemorative 50-cent coin made to celebrate the Year of the Rabbit. By varying the engraving depth and the finish of the precious metal, the environment around the colored rabbits was greatly enhanced in its detail.

Animal series are very popular as subjects of color because animals are colorful and are popular topics.

The 2000 Parrot copper-nickel issue in the Wildlife Protection series from the Congo paired an animal coin with a hologram, or “prism” as some world mints call them. Hologram animal series are still being made 13 years later (e.g., for the Cook Islands), even though a single holographic creature has yet to be located in the wild.

Color can look great on every kind of metal, and every major type of coin metal has been colorized.

North Korea has made a specialty out of coloring aluminum commemorative coins including a 2001 1-won piece designed to honor the Shanghai China Coin Show and Chinese Panda coins. This panda-less nation was not just flattering a trading partner with this coin, it was pandering to Panda coin collectors.

In the last decade, colored coins with appliqués that resemble color photographs have become increasingly common. They present a relatively inexpensive way to add color to a coin.

Color collectors have to be on guard about aftermarket colorization, which is an alteration and not a design enhancement. Altered coins are damaged. This crucial difference created some hesitation for collectors wanting to buy a handsomely enameled Bald Eagle coin issued by Liberia in 2000. The unlisted color silver-plated $10 coin was sold and distributed only through a third party called “Collector’s Showcase International” with a certificate of authenticity that was unclear about where and when the enamel work was completed. The good news is that this eagle is definitely mint-colored.

To determine if a coin is mint-colored, collectors can confirm from the mint specifications or certificate of authenticity card that comes with most commemoratives, or check a world coin catalog or ask a world coin dealer.

Since 2004, plenty of people have snapped up the various odd-shaped enameled coins of Somalia.

The most popular are the first ones, the electric guitars like the famous Yellow Klein. These were followed by dollar coins shaped like automobiles, motorcycles, large land mammals and various national maps. ¦