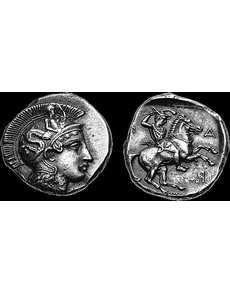 A late fifth century B.C. silver drachm from Pharsalos realized $106,200 during a Jan. 3 auction against an estimate of $750.

A silver drachm from Pharsalos, struck during the last quarter of the fifth century B.C., realized $106,200 Jan. 3 in Classical Numismatic Group’s auction of the BCD Collection of Coins of Thessaly.

The Pharsalos coin, which was once in the collection of Dr. J. Hewitt Judd, is in Near Extremely Fine condition and had an estimate of $750.

All 1,000 lots in the BCD collection were sold; the collection was offered in one of three auctions cataloged in separate catalogs published by the firm for auctions related to the 40th annual New York International Numismatic Convention.

The firm has not provided a total price realized for the portion containing the BCD Collection, but overall, the two-part Triton XV auction realized $8,681,189, including an 18 percent buyer’s fee; adding in the Cabinet W collection, the firm realized $13,672,589 for the auctions.

All successful bids are subject to an 18 percent buyer’s fee, with a discount to 15 percent for certain payment and bidding methods. Prices here reflect the 18 percent fee.

Greece, Thessaly, Larissa, early to mid-fourth century silver drachm, 6.17 grams, “toned, part of the horse’s head off flan but an unusually sharp strike for this type,” Near EF, $4,130.

Greece, Thessaly, Larissa, mid- to late fourth century silver stater, 12.22 grams, “attractive toning on a very pretty nymph’s head; the reverse struck on a tight flan, missing most of the horse’s tail and the top part of its head,” Near EF, $21,240.

Greece, Thessaly, Larissa, mid- to late fourth century B.C. silver stater, 12.21 grams, “nicely toned and very sharply struck on the reverse but with a small metal flaw at the top of the horse’s hind legs,” EF, $14,160.

Greece, Thessaly, Pelinna, mid-fourth century B.C. bronze dichalkon, 4.57 grams, “probably the best known of the few in existence and the only one in private hands,” “dark green patina,” Near VF, $8,260.