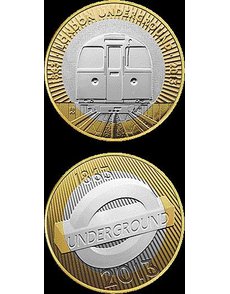 London Underground, the world’s first underground railway, opened in 1863 and is now celebrated on two £2 coins. One coin shows a vintage train, left, and the other the famous logo, right.

The world’s first underground railway opened in London on Jan. 10, 1863. Nearly 150 years later, the Royal Mint in Britain marks the milestone with two £2 coins, each bearing designs inspired by iconic images of the London Underground.

The coins will be placed into circulation in 2013. Collector versions are now available.

One of the coins, bearing the Roundel design, depicts the London Underground logo while the Train £2 coin shows a 1967 Victoria Line train hurtling out of a tunnel.

Edward Barber and Jay Osgerby of design firm Barber Osgerby created the Train design, which uses textures and perspectives to reflect the light and create a sense of movement.

The outer ring of the coin graphically suggests the tunnel wall with the rail lines extending into the center. The designers’ initials appear along the “wall.”

Barber and Osgerby said, “The £2 coin was the perfect choice; its form is naturally reminiscent of the Roundel that is the universal logo of the London Underground.”

Edwina Ellis, a former “Art on the Underground” artist, designed the Roundel coin.

The London Underground roundel logo first appeared on station platforms in 1908 — in 1916 Edward Johnson added the official Underground typeface to the bar. The coin design is inspired by a 1938 poster by Man Ray.

The obverse of both £2 coins features the effigy of Queen Elizabeth II by Ian Rank-Broadley.

The circulation version of the £2 coin has a copper-nickel center and nickel-brass ring; the coin weighs 12 grams and measures 28.4 millimeters in diameter.

A pair of Brilliant Uncirculated coins, one of each design, is available in a folder with unlimited mintage for £20.

A Proof .925 fine silver version (with the outer ring plated in .999 fine gold) is available in each design; each has the same weight and diameter as the circulating coins. The Proof silver coin has a maximum mintage of 12,000 coins per design, with 7,500 of each available individually for £50, and 1,500 available in a two-coin set for £100. The Royal Mint has not disclosed details about the release of the remaining coins, presumably in different packaging options.