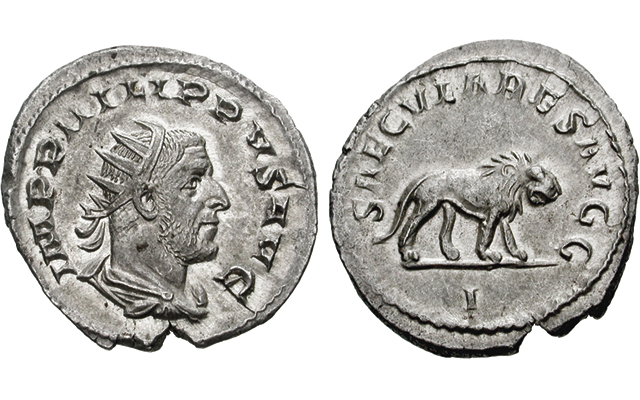 Among the predators used for entertainment at events held for the millennium was the lion, shown on the reverse of this double-denarius of Philip I. 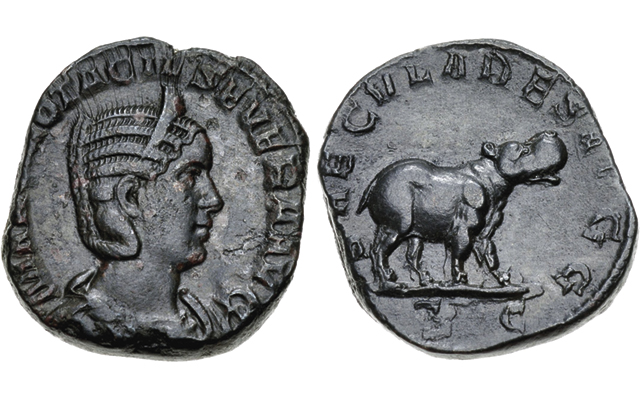 Though Otacilia Severa was allotted five designs for the secular games, the only one unique to her coinage was the hippopotamus, shown on the reverse of this sestertius. 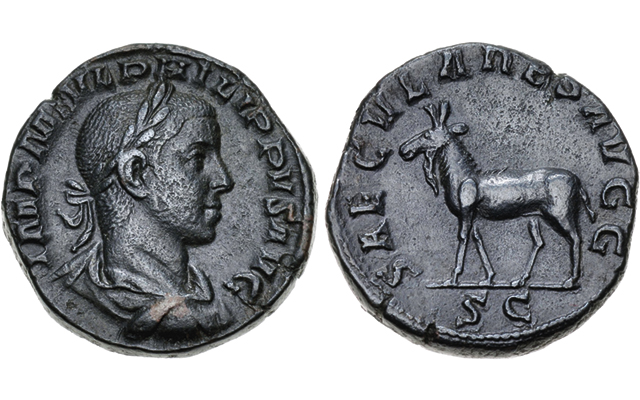 The creature on this sestertius is often described as a moose, but more likely it is a European elk. In the millennial games series it was used only by Philip II. 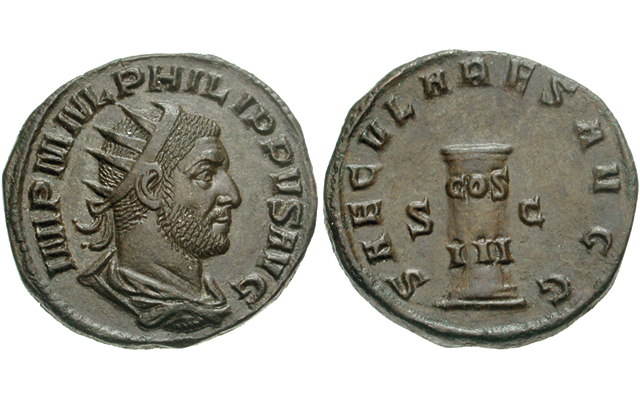 This dupondius of Philip I shows a column inscribed COS III. It marks the emperor’s third consulship, which he assumed on Jan. 1, A.D. 248, in the millennial year. 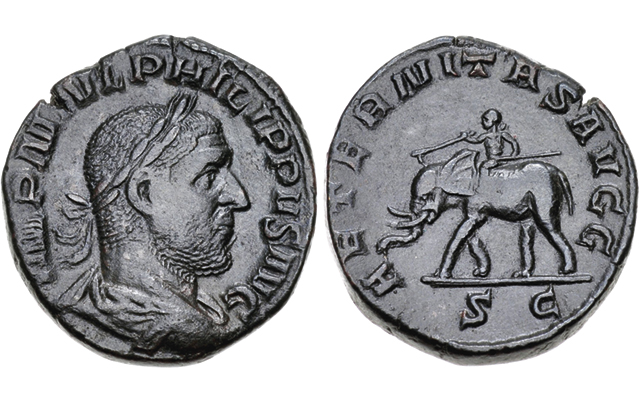 The longevity of Rome is marked on this sestertius of Philip I, inscribed AETERNITAS AVGG and showing an elephant, an animal admired for its long memory.

The archaeological record shows that the site of Rome has been inhabited since about 1000 B.C., but in ancient Roman lore, codified by Varro, its official foundation date was April 21, 753 B.C.

A thousand years afterward, Romans empire-wide thus celebrated the millennium of their civilization.

The reigning emperor, Philip I (A.D. 244 to 249), did not miss the chance to preside over magnificent games and to associate his family with the dawning of a new age on his nation’s 1,000th birthday. He issued attractive coins for the occasion, which are avidly collected for their historical interest and their varied designs.

Other emperors had reigned at times when secular games (ludi saeculares) were held. The dates were determined according to the Roman 100-year cycle or the Etruscan 110-year cycle, representing the lifespan of the longest-lived person born on the day a city was founded.

The millennium of 247 to 248 was a unique chance to celebrate Rome at a time when many wondered if the empire would survive to see its 1,100th birthday. Rome’s borders were constantly under attack by aggressive barbarians, and the millennial year afforded no special protection.

Careful study of Philip’s coins suggests that the emperor delayed the opening of his games because he was on the Danube front battling invasions by Germans and the Carpi. With these distractions, he likely could not have participated in the festivities until after the beginning of 248.

Millennial coins were struck in gold, silver and copper and in several denominations. They bear on their obverse the portrait of a member of the royal family: Philip I; his wife, Otacilia Severa; or their son, Philip II, who in 248 was raised from the rank of Caesar to be co-emperor with his father.

The reverses of these millennial coins usually are inscribed SAECVLARES AVGG, which suggests the celebrations marked the close of one age and the beginning of another.

Two other inscriptions on millennial coins are SAECVLVM NOVVM, meaning the “new age” and MILIARIVM SAECVLVM, which refers to the thousandth year. These two inscriptions each are used with a single design (though both also were used with the main inscription, SAECVLARES AVGG).

Coins inscribed SAECVLVM NOVVM show the facade of a temple containing a statue of seated divinity, perhaps Roma or Jupiter. Opinions vary whether the temple represents one dedicated to Jupiter Capitolinus or to Roma Aeterna. The temple usually has six columns, though sometimes eight; it is not generally believed that the distinction has any meaning beyond the whim of the die engraver.

The MILIARIVM SAECVLVM inscription is used with a type showing a low column, perhaps best described as a cippus. The bodies of such columns were inscribed to record public events. Those in the name of Philip I and his son record the occasion on which they were named consuls, Jan. 1, 248, whereas the one on the coins of Otacilia Severa bears no inscription.

The main draw for the millennial coinage, however, is not the inscriptions, but the animals used as designs: a lion, stag, antelope, European elk, hippopotamus, elephant and she-wolf.

Interestingly, the Rome Mint’s coinage that showed these animals was produced in different workshops (officinae). Each officina was allocated one animal, and each marked its work by placing a Roman numeral (I, II, III, IIII, V or VI) beneath the ground line on the reverse. A lion was the subject for the first officina, the she-wolf and twins for the second, the European elk for the third, the hippopotamus for the fourth, the stag for the fifth, and the antelope for the sixth.

The elephant is not included in this arrangement, as it has a different inscription, AETERNITAS AVGG, and it seems to belong to a separate series. The elephant is shown with a driver seated upon its neck, and it may have been more closely devoted to the emperor and his family than to Rome’s thousandth anniversary. It was an ideal creature for this inscription since it was renowned for its long memory.

Philip I depicted five animals on his coinage, the most impressive being the lion. It was an age-old symbol of royalty and power, which would have been especially familiar to Philip since his family hailed from a rather remote part of the Near East.

Two other of Philip’s animals were a stag and an antelope. Scholars have offered a variety of opinions on the identification of these two animals; they are distinct from one another, yet they are not easy to identify with certainty. The stag has antlers with numerous points, whereas the antelope (sometimes described as a gazelle or an ibex) has slender antlers that curve near the ends.

A European elk appears exclusively on the coins of Philip II. This imposing creature, with its upright carriage, “beard” and nub-horns looks markedly different than the stag or the antelope of his father’s coins. The creature on coins of Philip II is sometimes is described as a moose.

The most common reverse type for the coins of Otacilia Severa is the hippopotamus, a creature that must have delighted the audiences in Rome. Why it was dedicated only to her (just as the European elk was exclusive to her son) is not recorded.

Rounding out the series is a reverse type inscribed SAECVLARES AVGG that celebrates Rome’s origins and longevity with a depiction of the she-wolf suckling Romulus and Remus. This iconic scene was familiar to all Romans since the mythical twins, who as infants were suckled by the she-wolf, are credited with the foundation of Rome.