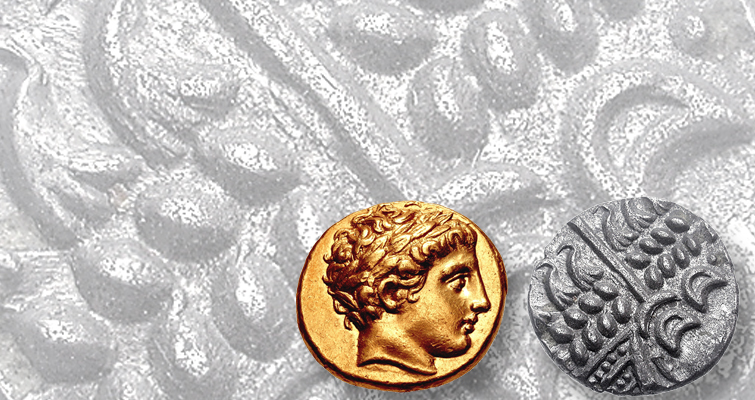 The portrait of Apollo on this gold stater of King Philip II of Macedon is reduced to a grouping of abstract forms on a billon stater of the Durotriges of southwest Britain. 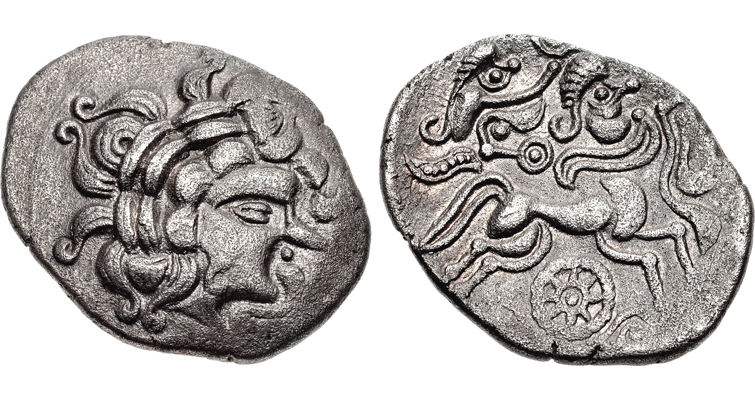 This billon stater of the Gaulish Redones tribe features a wild-haired portrait derived from the Greek god Apollo. The reverse shows a chariot with components disassembled. 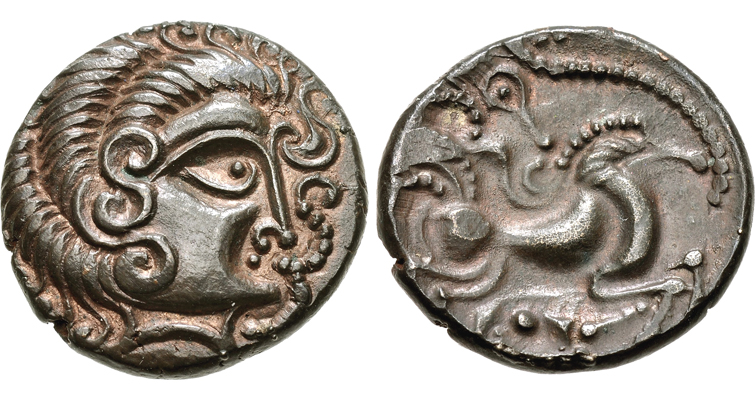 The Coriosolites of Gaul issued this billon stater using the gold coins of King Philip II of Macedon as a prototype. The contours of the portrait are graceful and imaginative. 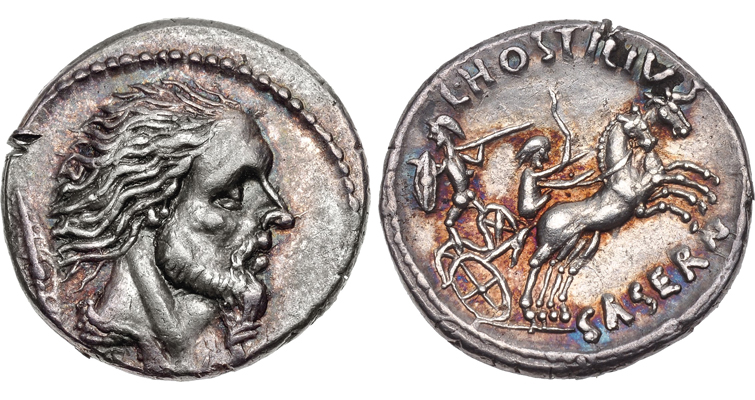 This Roman denarius of 48 B.C. portrays a Gaul on its obverse and two Gauls in a chariot on its reverse. The portrait may represent the defeated Gallic chieftain Vercingetorix. 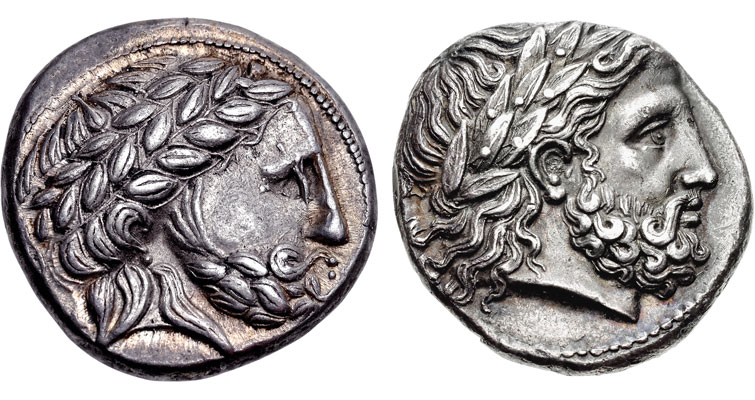 The ancient Celts are impossible to define in anything but the broadest of terms. The dearth of written records means that we must rely on secondhand accounts and archaeology to fill in the gaps. Even so, the Celts left a rich cultural legacy in the many objects that have been unearthed almost everywhere north of the Mediterranean basin, from Ireland to the shores of the Black Sea.

Although some of the most famous “Celts” are those of the British Isles, many modern scholars reject the long-held belief there was a mass migration of Celts onto the British Isles. They cite strong evidence that the Iron Age inhabitants of Britain were not Celts at all, but merely people who co-opted some customs of their Celtic neighbors on the European mainland.

Of great importance to the study of the ancient Celts is their coinage, which from the late third century B.C. through at least the 1st century A.D., was issued in great quantity. These coins testify not only to the existence of various Celtic populations, but through their arresting designs they offer a glimpse of how the Celts perceived their world and how they wished to portray it.

For all of the inventiveness of the Celts, it must be acknowledged that most of their coin designs are derived from coins of the Greeks and the Romans. But that is where the similarity ends, for the Celts took those designs and transformed them into images that often are far removed from their prototypes.

A perfect example is the “portrait” on the billon (debased silver) stater of the Durotriges of southwestern Britain illustrated here. When compared with the portrait of Apollo on the Greek gold stater of the Macedonian King Philip II (359 to 336 B.C.), the connection seems remote, for there could hardly be greater contrast in artistic approach.

The portrait on the stater of Philip II is naturalistic, as if the artist intended to copy the human image with great accuracy — even if the result was idealized (as would be appropriate for a god). The billon stater of the Durotriges has broken that image down into a series of pellets, dashes, lines and crescents such that if the distant prototype were not known, one would not even associate the two designs.

There was considerable time and distance between these two coins. The gold prototype was introduced in the mid-fourth century B.C. in northern Greece, whereas the billon derivative was struck about three centuries later near the southern shore of Britain. Furthermore, the coin of the Durotriges is not a “first generation” derivative, but is several steps down the line.

To see something somewhat closer to the original of Philip II we may look to a billon stater issued circa 100 to 50 B.C. by the Redones of northwestern Gaul. In this case the portrait is far more intact, even if the hair is wild and the laurel wreath is highly stylized.

The reverse of the Redones stater shows a chariot, as appears on the Philip II staters. However, in this case the chariot is disassembled: an insect-like charioteer floats above a horse composed of long, curved shapes and pellets. Beneath is a wheel, completely divorced from the chariot, which has been lost in the translation of the design.

Another derivative of Philip II gold staters is a billon stater issued circa 100 to 50 B.C. by the Coriosolites (“army of the sun”), a tribe of northwestern Gaul. They lived in Brittany, lower Normandy, and also populated the Channel Islands; their coins often were imported to Britain as a result of strong trade relations across the English Channel.

In this case the interpretation of the Philip II gold stater is equally inventive, though the treatment of the hair is entirely different than that of the contemporary stater of the Redones. The hair of “Apollo” is more controlled, and instead of lashing outward in all directions it is tightly curled on the head and arranged in concentric curls.

On the Coriosolites stater some interesting curves represent the ear, and the hair takes on a snake-like form along the exterior, being especially visible on this example at the nape of the neck and at the forehead.

The portrait is further adorned with a pelleted decoration before the face. More arresting, however, is the streamlined rendering of the brow, eye, nose and mouth, which appear to be a unit separate from the cheek and the hair.

We may take pause to compare such Picassoesque portraits with an image from a contemporary Roman silver denarius. In this case the head is that of a Gaulish Celt as envisioned by a die engraver at the Rome mint in 48 B.C.

It was issued by the moneyer L. Hostilius Saserna not long after Julius Caesar’s defeat of a massive Gallic army in 52 B.C. at the fortified settlement of Alesia in central Gaul. Leading the army was the Gallic chieftain Vercingetorix, and it seems likely that this vigorous portrait was intended to represent him specifically.

Celts also occupied the central and northern parts of Europe further east, all along the Danube to where it issued into the Black Sea. These Celts struck a great many coins, which are distinct from those of their western counterparts. One of their favorite prototypes was the silver tetradrachm of Philip II, which shows the portrait of the Greek god Zeus and a horseman.

The prototype issue is exactly what one would expect from a well-made Greek coin of the fourth century B.C.: it bears images meant to reproduce people, animals and objects in as lifelike a manner as possible. This tetradrachm of Philip II achieves its aim with a remarkable degree of refinement.

This tetradrachm of an uncertain Celtic tribe, seemingly issued in the second century B.C., retains the basic forms of the Philip II prototype, but whimsically alters the portrait to create an intriguing work of art. In doing so, it makes no pretensions of trying to depict things in the way the human eye perceives them.