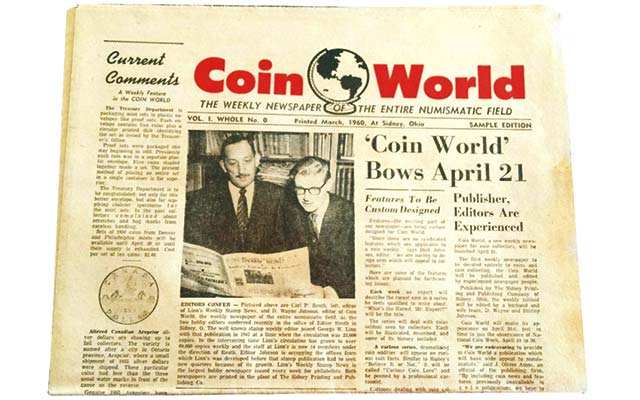 The Sample Edition of Coin World was printed in March of 1960 to gauge hobby reaction to a weekly newspaper about coins. Within one year, there were 53,000 subscribers.

At a local flea market I found and bought three of the first issues of Coin World. In addition to Vol. 1, issues No. 0 and 1, the seller had issue No. 7. All of these once belonged to charter subscriber No. 52.

On occasion, readers share their discovery of charter issues with us.

Coin World was founded as a weekly publication in 1960 by J. Oliver Amos, a publishing professional from the third generation of newspaper publishers.

Amos took his experiences in producing The Sidney Daily News to the coin field, applying what he learned from printing Linn’s Stamp News. In 1960, the concept of a weekly coin publication was new.

On the 25th anniversary of Coin World in 1985, Amos related that he saw “all the opportunities which could be developed from a weekly presentation — club meetings all over the country, personalities, and many other ideas that we had learned in publishing The Sidney Daily News as a community newspaper.”

With the help of James F. Kelly of Dayton, Ohio, the idea to include a weekly “Trends” column reflecting the changes in coin values was formed. Kelly was hired to be the inaugural Coin World Trends editor and D. Wayne Johnson of Shawnee Mission, Kan., was tapped to be the inaugural editor-in-chief.

The Sample Edition (Vol. 1 No. 0) was printed in March 1960, and its eight pages were designed to show potential subscribers and advertisers the look of the new publication. The first official issue was dated April 21, 1960. Within a year, more than 53,000 paid subscribers were receiving the publication.

Coin World has of course changed over time since then, and is no longer printed from newsprint like it was for so long. It is now a full-color, magazine-size publication, with a monthly edition, weekly issues, and of course a website where breaking hobby news is reported.

There are no records of charter subscribers, and so we cannot ascertain the name of that original subscriber.