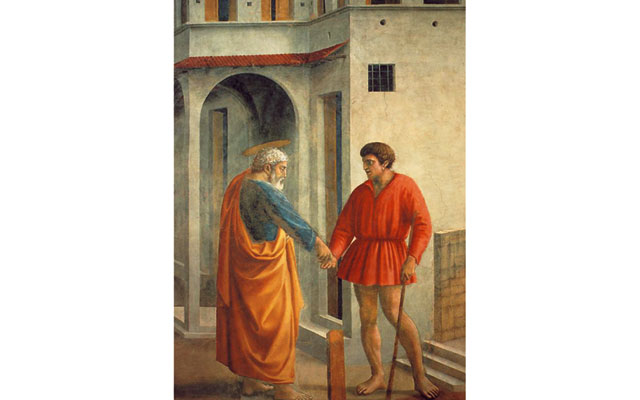 The shekel was used as tribute money, as seen depicted in this fresco by Italian renaissance painter Masaccio in Florence. 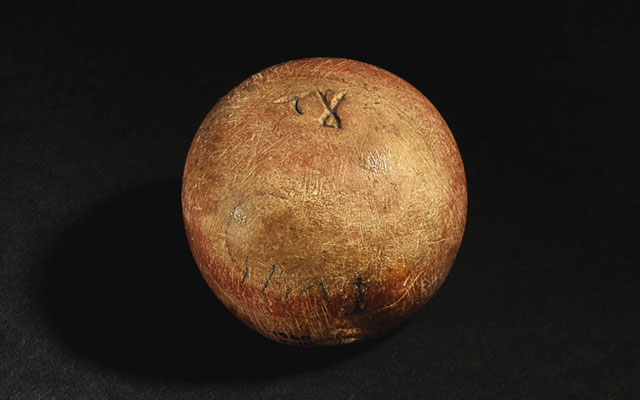 This dome-shaped limestone 8-shekel weight dating to the Iron Age was excavated at Lachish in the Levant. 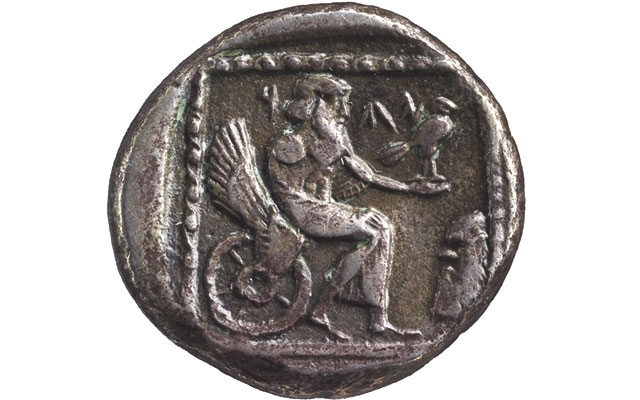 The silver quarter-shekel coin shown was minted in Judaea in the fourth century B.C. 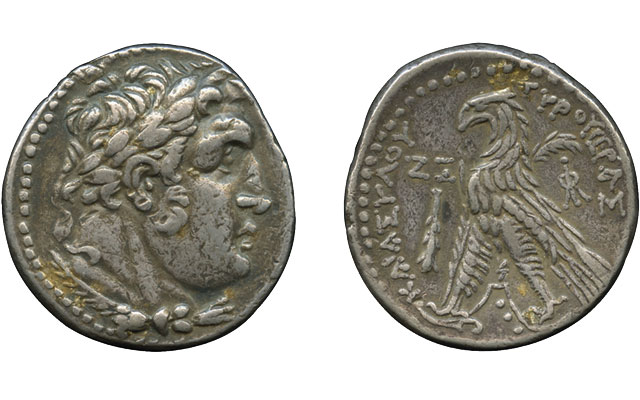 This silver shekel, minted in Tyre in 59 B.C., represents a standard coinage unit valid for centuries. 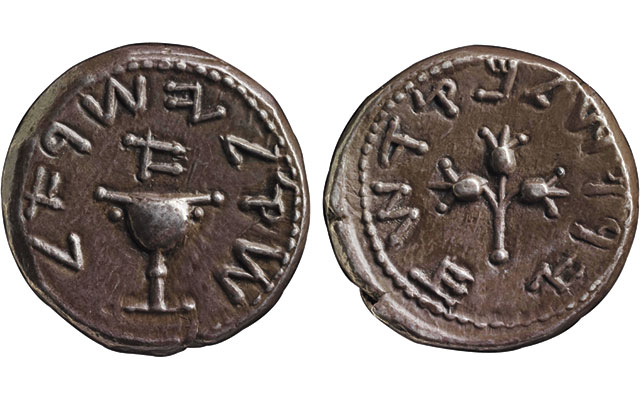 This silver shekel from the First Jewish Revolt was minted in Jerusalem in A.D. 66 to 67.

Editor's note: The following is the first in Coin World's Symbols of Power series about three early coinage units.

Few words have such long and complex histories, and have held such widespread influence, as those relating to money. Take the word “dollar,” for instance, or “franc,” “rupee” or “drachma”; all are terms that will be familiar to most people, even if they have never actually used them as currency.

A new book written by curators at London’s British Museum takes an alternative approach to monetary history. It uses currency terms such as these as its starting point, discussing historical events through the prism of 10 well-known coin names. Some are no longer in everyday use, but they survive as linguistic terms, preserved in vocabulary and literature. They are legacies of trade and migration, and are sometimes revived in new and unexpected ways. This article narrows the focus to just three terms the book discusses, “shekel,”“florin” and “yen,”and shows how they have developed and changed in meaning over the years.

Our story begins with “shekel,” a term so old that it predates the invention of coined money by at least a couple of millennia. It began as a weight measurement in the ancient Near East in about 3000 B.C., such dating of course being fairly approximate, and it derives from the Hebrew word meaning “weighing.” Weight and monetary terms have sat together throughout history, and “shekel” is an early example of a term whose use eventually crossed over to have a monetary value.

It is perhaps best known to modern audiences for featuring in the Old Testament. At Genesis 23:16, for example, we hear of “four hundred shekels of the standard recognized by merchants.” As this passage indicates, there was no single shekel weight standard, but many different standards that varied according to local conditions, which meant that access to a good set of weights was essential.

The appearance of shekel coins happened very gradually, and the first step was the adoption of silver for the balancing of payments, from about 2400 B.C. Nonperishable materials like metals have a very long history in trade and exchange. They were not as prone to decay as items such as grain, and their supply did not fluctuate seasonally. After the invention of coins in the seventh century B.C. the shekel became synonymous with a number of silver coinages in the Near East: coins were, after all, merely weighed and stamped pieces of metal.

The Persian province of Judaea, for which the shekel would later become especially symbolic, did not begin producing its own coins until the fourth century B.C. Instead it imported silver coins mainly from the West, and it is likely that these coins were referred to as shekels, or divisions of shekels in the local Semitic languages, regardless of their original names.

A unique quarter shekel in the British Museum depicts a bearded deity sat on a winged chariot. Its inscription, it is supposed, is YHD, a monogram for “Yehud,” but it could also be interpreted as “YHW” or “YHR,” meaning “Yahweh,” or God. This could be controversial since the Second Commandment of the Hebrew Bible states that “thou shalt make no graven images of anything in heaven or on earth.” It is possible, however, that the coin was initially produced at Gaza, a pagan city. If true, then the featured deity is only one among a vast pantheon of gods that existed across the region, and the controversy is averted.

The Phoenician coastal city of Tyre, in modern Lebanon, became a particularly important coin producer because the silver in its shekels was exceptionally pure, and so they became the coin of choice for paying the half shekel Temple tribute obligatory for Jewish men. The solicitation of this tax even forms the basis for one of Jesus’ miracles, which begins with tax collectors visiting him and Peter on the Sea of Galilee demanding that tribute be paid (Matthew 17:27). They have no money, so Jesus tells Peter to throw a line into the sea and to open the mouth of the first fish he catches. Peter obeys and finds a shekel, translated into “stater” for the Greek-speaking readers of the New Testament, in the mouth of the fish.

The First Jewish Revolt of A.D. 65 to 70 transformed the shekel into a potent symbol of political defiance. The rebels minted shekels, half-shekels and quarter-shekels in Jerusalem during the war. Featuring the Omer cup and three pomegranates, their imagery was closely related to Jewish religious practice. Significantly, these were the first coins specifically to have the denomination “shekel” inscribed upon them.

In coinage terms, the shekel’s story might have ended in A.D. 70 with the defeat of the rebels and fall of Jerusalem to the Romans. Yet it received an unexpected 20th century revival with the announcement, in 1969, by Israel that its greatly devalued Israeli pound was to be replaced by the shekel, or sheqel. New notes and coins finally appeared in 1980.

As Israel’s finance minister said, by adopting the sheqel Israel was “returning to its roots.” The new coins even featured the Omer cup in reference to the shekels of the First Jewish Revolt. Its revival as a currency in the 20th century provides perhaps an odd coda for a term that came into existence 5,000 years ago, but it reflects the shekel’s multilayered history: beginning as a practical solution to help standardize accounting, it developed into a symbolic representation of historic continuity for the people of Israel.