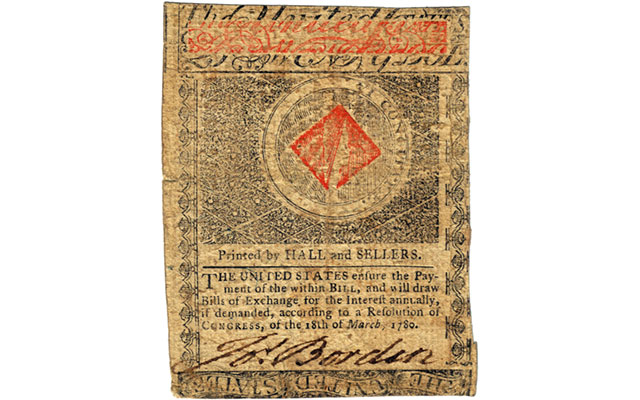 The New Jersey note was part of a joint credit emission with the United States dated June 9, 1780, to replace older notes and was signed by Joseph Borden on the back. 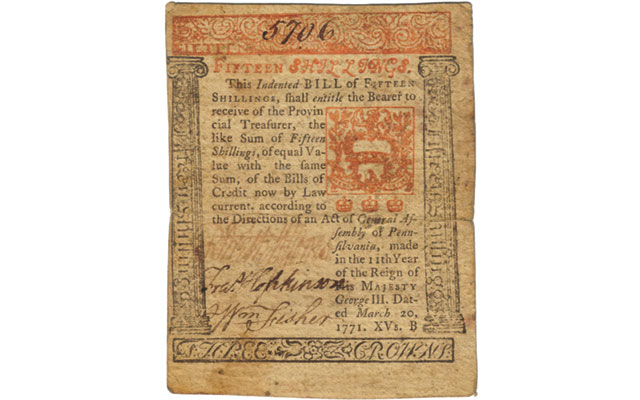 Like many early American notes, this Pennsylvania emission dated March 20, 1771, is signed by prominent figures, including Francis Hopkinson (middle signature of the three).

Editor's note: The following is the third in a three-part series of posts in Todd Sciore's All in the family feature from the June monthly issue of Coin World.

Colonial currency was issued by the 13 Original Colonies and, like its cousin Continental currency, it often carries the historically noteworthy signatures of leading patriots, legislators, and military commanders, interesting bits of Americana that harken back to the formation of the United States.

The notes featured here are issues that were signed by Francis Hopkinson and Col. Joseph Borden respectively.

The note signed by Hopkinson (along with Robert Strettell Jones and William Fisher) is a Pennsylvania emission dated March 20, 1771, that was for the initial purpose of defending the colony. However, a portion of the funds ended up being used for street repairs and grading. The issue was printed in several denominations by the firm of David Hall & William Sellers in Philadelphia.

The New Jersey note was part of a joint credit emission with the United States dated June 9, 1780, to replace older notes and was also printed in several denominations by Hall and Sellers. The David Brearley and Philemon Dickinson signatures, which are noteworthy in their own right, appear on the face, while Joseph Borden’s signature on behalf of the United States appears on the back.

These patriotic relatives both endorsed early American currency, lending their good names and reputations to the legitimacy of the respective notes. Despite Hopkinson’s ties to New Jersey, according to longtime antiquarian-book collector and dealer Joseph Felcone, documents signed by Hopkinson with a direct connection to the Garden State are few and far between. Felcone does however, verify the existence of at least one coveted piece of Hopkinson-signed Jerseyana — a bill of exchange dated Oct. 30, 1780, from the Loan Office of the United States. It was signed by Hopkinson in the capacity of treasurer for the Continental Loan Office and, coincidentally, was countersigned by Joseph Borden as commissioner of the Loan Office for New Jersey.