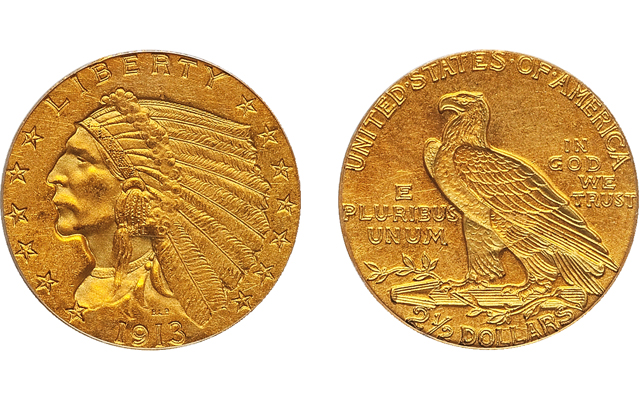 Twentieth century Matte Proof gold coins aren’t as flashy as Brilliant Proofs and a few made it into circulation. This lightly circulated 1913 $2.50 Indian Head quarter eagle in Proof 58 brought just under $5,000 last year at auction.

The story: Matte Proof gold coins were produced for collectors at the Philadelphia Mint from 1908 through 1915. While all of the Coronet Proof coinage displays reflective fields with often frosty devices, Matte Proof Indian Head $2.50, $5 and $10 coins along with Saint-Gaudens $20 double eagles have a fine sandblast texture that reflects light with millions of microscopic facets.

The visual experience of a Matte Proof is highly different than that of a Brilliant Proof, and it’s often considered an acquired taste.

Given the lack of flash, it’s not surprising that a few Matte Proof gold coins made it into circulation. This 1913 Indian Head $2.50 quarter eagle is graded Proof 58 by Professional Coin Grading Service and has the fine sandblast texture and razor-sharp strike that one expects with a Proof coin. It has just a touch of wear at the high points.

Given the lack of Matte Proof Indian Head $2.50 and $5 coins in lower grades like Proof 60 through Proof 63, this example presented an opportunity for a budget-minded collector when it brought $4,993.75 at a Jan. 11, 2013, Heritage auction.