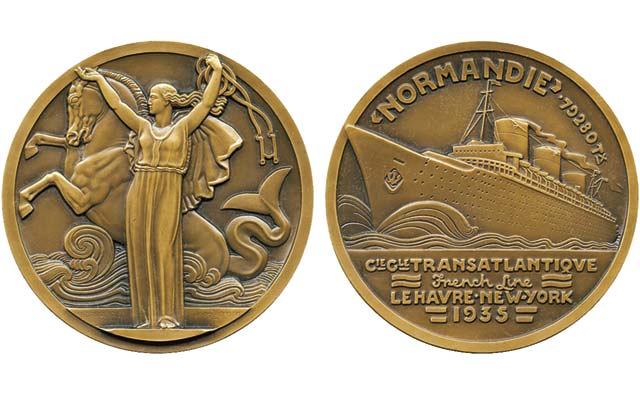 The SS Normandie, a French passenger liner, was commandeered by the United States during World War II. A bronze medal for the ship’s 1935 launch realized $275 U.S. in a Feb. 7 auction.

When the SS Normandie entered service in 1935, it was the largest and fastest passenger ship afloat. Within a decade, the French vessel had been commandeered by the United States to serve in war, but was destroyed.

The Normandie was built in Saint-Nazaire for the Compagnie Générale Transatlantique, and entered service in 1935. The ship’s lavish interiors were filled with art-deco designs and the ship earned the Blue Riband (an unofficial award for Atlantic Ocean passenger liners for the highest speed) several times.

The vessel sought haven at New York City as war loomed in Europe in 1939 and was interned by the U.S. government after Germany invaded Poland. The U.S. government seized it after the bombing of Pearl Harbor. Redesignated the SS Normandie, the ship was being converted into the USS Lafayette, a troop carrier. However, it caught fire and sank into the Hudson River. Initially salvaged, restoration proved to be too costly and the ship was scrapped in 1946.

A bronze medal by Jean Vernon marking the launch of the ship sold in the A.H. Baldwin & Sons Ltd. Feb. 7 Spring Argentum sale.

The obverse of the medal features a sea-goddess, arms held above her, as she frees a sea-horse. The reverse provides a port-side (left) view of the liner under steam.

The medal measures 68 millimeters in diameter and is in Mint State condition.