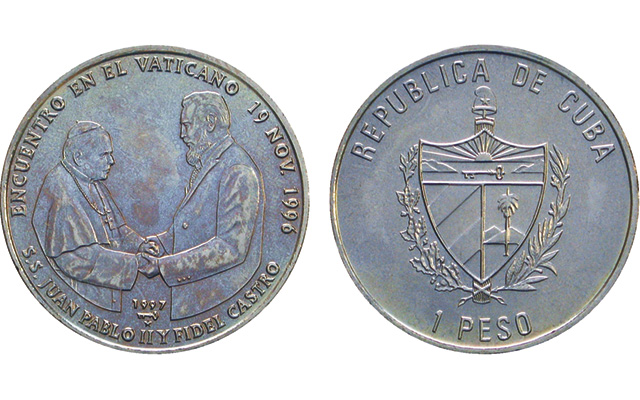 This 1997 Cuban peso coin commemorates a meeting between Pope John Paul II and Fidel Castro and has not been legal to import from Cuba to the United States under the Cuban embargo.

Cuban Numismatic Association President Emilio Ortiz says the implications of President Barack Obama’s plan to rethink U.S.-Cuba relations are not yet clear, but if and when importing Cuban coins to the United States becomes legal, it would be a boon to that corner of the numismatic marketplace.

“The hobby of Cuban collectors and Cuban material will grow exponentially because simply there’s a wider base of collectors and more availability and product,” Ortiz said. “It would be an easier flow of commerce.”

President Obama announced a plan on Dec. 19 to “end our outdated approach” toward relations with Cuba and ease some of the travel, diplomatic and economic sanctions that have been in effect since 1962.

READ: What could Cuban embargo easing mean for coin collectors?

The administration doesn’t directly address numismatic items on the White House website, but it has a statement on the site regarding traveler commerce in general. Licensed U.S. travelers under the new policy can bring back $400 worth of Cuban goods.

Only Congress has the authority to formally and entirely lift the Cuban embargo, which is where Ortiz’s concerns come in.

“The issue here is where and how does dealing with the Cuban numismatic material fall” under U.S. trading restrictions, Ortiz said.

Embargo regulations ban the importing of Cuban coins and paper money issued since 1962.

Ortiz said that with regard to Cuban numismatics in the United States, the 500-pound gorilla in the room remains eBay.

The popular online auction site went above and beyond embargo regulations in 2013 to prohibit the sale of all Cuban coins and paper currency, including items issued before 1962, which are legally brought into the United States and collected.

“When they pulled [Cuban items] out of the auction process, they really sucked the wind out of the Cuban Numismatic Association and everybody that collected Cuban material,” Ortiz said.

He continued, “On eBay, that is the entry market for the novice, and the medium collector, as well, who finds stuff to fill the holes [in their collection]. If you don’t have that grass-roots movement of people, then the collectors stagnate.”

Coin World has reached out to eBay several times for comment, but the company has not yet addressed the subject.