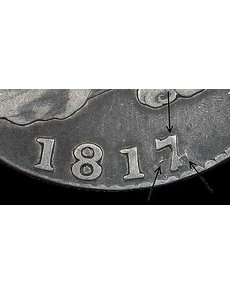 Numismatic rarities continue to make their presence known, decades after their production. The ninth known 1817/4 Capped Bust half dollar, close-up of date shown, was found in a Colorado estate in 2007.

If you are a newcomer to coin collecting, you might think that all of the great discoveries have already been made. How wrong you would be!

This was brought to mind recently in my work with John Ostendorf and others in the Civil War Token Society on two parallel projects.

The first is my Guide Book to Civil War Tokens, now nearing its final manuscript stages and due to be published by Whitman in 2013.

The second is helping the CWTS with the third edition of Civil War Store Cards, by George and Melvin Fuld, the last edition of which was issued in 1975. Enough new discoveries have been made that the third edition will likely list the best part of 1,000 that were not known before.

Civil War tokens are a delight to study, but the field is enjoyed by only a small percentage of collectors in America.

Among federal coins, are there opportunities to make new discoveries? The poster example of the answer “yes” is the 1817/4 Capped Bust half dollar.

Although early half dollars had been collected and studied since the late 19th century, this overdate variety was unknown until 1930.

E.T. Wallis from Los Angeles announced in the October 1930 issue of The Numismatist that he had just found a new overdate, 1817/4, with the digits boldly defined. Wallis acquired it from a family that had held it since 1846.

In the 1934 edition of The National Catalog of U.S. Coins (a publication long forgotten), Wallis advertised it for $2,500. Years later it was acquired by Al Overton.

By then, it had not been listed in reference books, a frustrating situation. In 1953, Overton sold it to Louis E. Eliasberg Sr. of Baltimore, who had already completed his collection of known dates and Mint marks of U.S. coins, but was glad to learn of this “new” variety.

I had the pleasure of offering the Eliasberg coin at auction in 1997, where it was graded Extremely Fine 45, the finest known, and crossed the block at $209,000. Later, the coin changed hands a couple of times and was sold by Stack’s in October 2006 for $310,500, which today stands as the record.

By the time of the 2006 auction, other examples had been found. Coin World’s Oct. 24, 2005, issue reported that another had been found in upstate New York in a pile of fill dirt, bringing the total to eight known. The Dec. 17, 2007, issue reported the ninth known 1817/4, a coin recently discovered by a Colorado woman who inherited it in a group. Today any one of the coins, typically in Very Fine grade, is valued over $150,000.