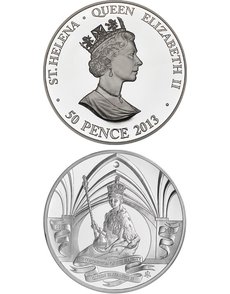 To celebrate Queen Elizabeth II’s Diamond Jubilee of coronation, the East India Company sets diamonds (top of reverse) from the mine that produced the famous Koh-i-Noor diamond into two Proof silver coins — the 5-ounce 50-pence coin shown here, and a 1-ounce 20-pence piece (not shown). 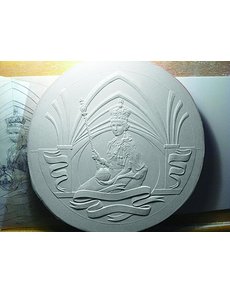 To mark Queen Elizabeth II’s Diamond Jubilee of coronation, no ordinary diamond would do for the East India Company.

The modern corporation has issued two commemorative Prooflike .999 fine silver coins through St. Helena featuring an embedded diamond mined from the same mine as the famous Koh-i-Noor diamond.

The gem’s name means “Mountain of Light” in Persian.

The Koh-i-Noor was confiscated from Duleep Singh in 1850 by the British East India Company and became part of the British crown jewels when Queen Victoria, the only other British monarch to reach her diamond jubilee, was proclaimed Empress of India in 1877.

The diamond is currently set into the crown of Queen Elizabeth and on display at the Tower of London.

A myth accompanying the Koh-i-Noor allegedly touches men, but not women.

The myth surrounding the possession of the Koh-i-Noor found its roots in an early Hindu scripture recounting the first appearance of the stone in 1306: “He who owns this diamond will own the world, but also know all its misfortunes. Only God, or a woman, may wear it with impunity.”

The 2013 coins feature the Raphael Maklouf effigy of Queen Elizabeth II on the obverse.

The reverse was designed by former Royal Mint Chief Engraver Matthew Bonaccorsi and shows the queen wearing the Imperial State Crown in front of arches at Westminster Abbey, where she was crowned in 1953.

A diamond appears above the queen, against the background of the Abbey’s vaulted ceiling. A ribbon, with THE CORONATION OF HER MAJESTY QUEEN ELIZABETH II, appears below. Ribbons on opposite sides bear the dates 1953 and 2013.

For more information about the coins, or to order, visit the firm’s website, www.eicgold.com. ¦