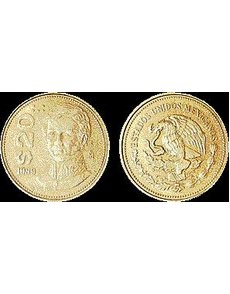 A collector’s 1989 20-peso coin is no longer legal tender in Mexico and has very little numismatic value in today’s market. Despite this, world coins of little monetary value can be a gateway to broader coin-collecting adventures.

I have looked on the Internet and cannot find this coin or any info on it. Is it worth anything?

Mr. Kaczmar’s coin appears to be a 1989 Mexican brass 20-peso coin, which is no longer legal tender in that country (as of Jan. 1, 1993, when Mexico remonetized its coins and paper money).

As a collectible, its value is negligible. Krause’s Standard Catalog of World Coins, 1901-2000 values it at 15 cents (U.S.) coin in Very Fine condition and at 30 cents in Extremely Fine. I would estimate its condition to be somewhere in that range. Even in Uncirculated, the Standard Catalog only gives it a value of $1.50. If sold to a coin shop, a retailer might offer a few cents for it, at best.

Nonetheless, world coins like this one are great conversation pieces and are good avenues for getting youngsters, and even older folk, involved in coin collecting.

Regarding the 1915 Panama Pacific International Exposition “souvenir penny” featured in the March 19 “Readers Ask,” past Coin World writer Eric von Klinger writes: “The 1915 Pan-Pac souvenir penny is probably cataloged in a book on such pieces in the Coin World library. Such pieces were commonly called ‘lucky pennies,’ and I believe the title of the book refers to ‘large lucky pennies.’ For an idea of price, refer to Steve Alpert’s general book on tokens and medals. This book is about 20 years old, but the Pan-Pac ‘penny’ was probably sold in quantity, so figure a generic common price in the Alpert book and double it, at least.”

Of the two Alpert books consulted — Tokens and Medals: A Guide to the Identification and Values of United States Exonumia (1982) by Stephen P. Alpert and Lawrence E. Elman, and Large Lucky Souvenir Coins (1979) by Alpert — neither lists an exact match to the souvenir piece in question.

The most similar piece is found in Large Lucky Souvenir Coins, cataloged by Alpert as “760 A,” but the Indian Head rendering on the obverse is not nearly as refined and the piece has a different, mountainous horizon on the reverse. As well, the 760 A piece carries the legend DES. PAT. APLD. PURE COPPER on its reverse, whereas the example featured in the March 19 “Readers Ask” does not. Alpert’s Tokens and Medals book does not give detailed listings, but general price ranges.

It is likely, then, that the “lucky penny” is a variation (or the other pieces are variations in relation to it) seemingly unlisted in Alpert’s books in our library. Hobbyists with any further information are welcome to contact us.