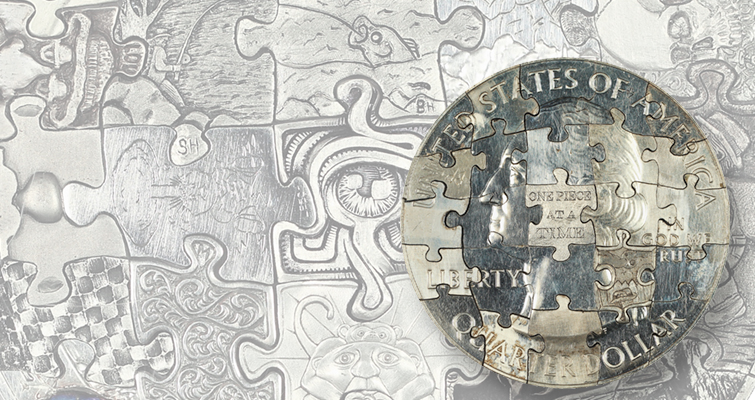 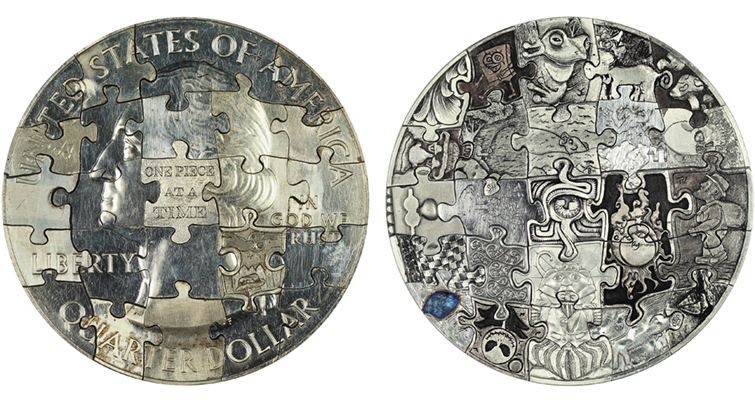 Obverse and reverse of reassembled puzzle-cut 2011 Gettysburg National Military Park 5-ounce silver bullion coin. The coin was cut into 25 puzzle pieces, which were then individually carved by hobo-nickel-style coin carvers. 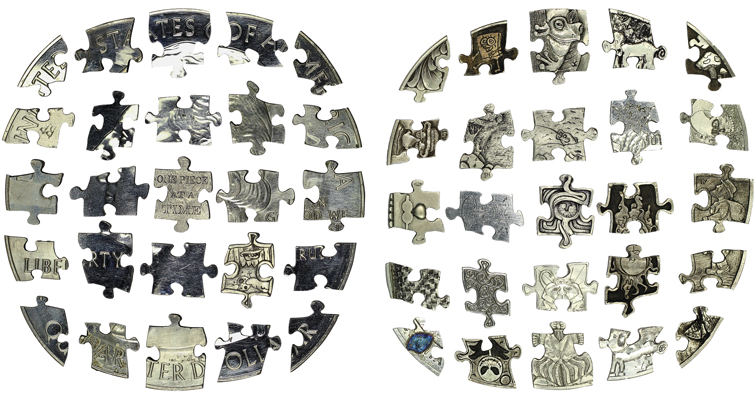 A total of 21 carvers worldwide participated in the fundraising project to help defray medical expenses for fellow carver Andy Gonzales, who is battling Lyme disease.

Twenty-one hobo-nickel-style coin carvers from around the world united recently to individually carve 25 irregular pieces cut from an America the Beautiful 5-ounce silver bullion quarter dollar to auction as a unified jigsaw puzzle to raise money to help support the family of a fellow carver battling Lyme disease.

The 25-piece carved bullion puzzle, the result of a nine-month project initiated by one of the 21 carvers, Don Berry, is being offered on eBay with a March 13 closing date. The 10-day auction listing went live the evening of March 3. As of 8 a.m. Eastern Time March 4, bidding was at $1,358.33, with 23 bids placed.

Berry is president of the Verdugo Hills Coin Club and treasurer of the Glendale Coin Club, both in California, and a board member of the Numismatic Association of Southern California.

Berry said he believes the participating carvers did an “amazing’” job with their designs and keeping the project secret for nine months.

“We all have friends in this hobby, and we all share what we know and try to be there for each other when we can,” Berry said in a Facebook post at the Original Hobo Nickel Society group. “Personally I say if I can, I will. When my daughter was born last May, I said I can so I will. I purchased the 5-ounce silver coin, sent it off to be cut into a puzzle, and recruited 21 carvers to carve what ever they wanted. I had no idea how this would turn out, and heck I could only pray that all the pieces would make it around the country and world and home safely.

“And as you all saw, they made it back, one piece at a time.”

In order to raise funds for medical expenses for ailing carver Andy Gonzales and his family, Berry came up with the idea of having a 2011 Gettysburg National Military Park 3-inch .999 fine silver bullion coin cut into 25 separate puzzle pieces for carving by fellow coin carvers worldwide.

Berry enlisted the assistance of Michael Kittle from Michael Kittle Rare Coins in Agoura Hills, Calif.,, who in turn contacted Jeremy Barrett from Coin Cut Art in Michigan. Barrett has been cutting coins since the 1980s, an art he learned from his father. Barrett turned a part-time hobby into a full-time business run from his home since 2007 when the construction industry faltered.

Barrett says there’s no legal problem with his coin-cutting pursuits. He explains on his website, “Section 331. Title 18, U.S. CODE: Prohibits among other things the fraudulent alteration and mutilation of United States and foreign coins. This statute does not prohibit the mutilation of coins if done without fraudulent intent or if the mutilated coins are not used fraudulently.”

Barrett took the 2011 Gettysburg National Military Park 3-inch silver bullion coin shipped to him by Berry and cut it into the 25 separate pieces, all by hand.

Barrett returned the now-segmented Gettysburg bullion coin to Berry, who then arranged for each of the 25 pieces to be distributed to participating coin carvers.

Some of the 21 carvers did more than one piece, carving designs of their own choice on one or both sides of the puzzle pieces they were shipped.

“In most cases, they did not know what the other pieces would look like, though there were a few artists who worked together on adjoining pieces,” Kittle said.

Kittle explains that nearly all of the carving was done on the reverse of the 2011 5-ounce coin, almost obliterating the complete Gettysburg design.

“The obverse side of the coin with Washington was to remain intact, except for the center piece which was engraved ‘One Piece at a Time,’ though one of the other carvers did carve on that side too.

“A few of the other carvers carved initials on the edges of the puzzle pieces as well.”

Kittle filmed a short YouTube video on the coin puzzle that can be accessed here.

Additional information can also be found online in the Original Hobo Nickel Society group on Facebook here and also on Kittle’s website.

Kittle also planned to have the finished puzzle coin at his table March 12 and 13 at the Buena Park Coin Show at Retail Clerks Hall, 8550 Stanton, in Buena Park, Calif. 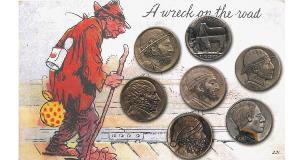 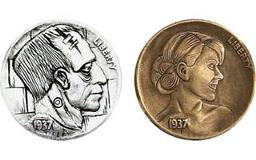