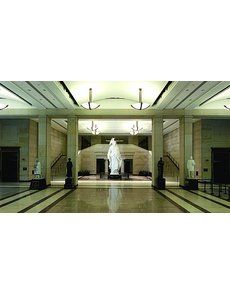 The Nov. 20 presentation of 25 congressional gold medals to Native American tribes whose members served as code talkers during World Wars I and II is being held in the Capitol Visitor Center’s Emancipation Hall. The hall displays the original plaster model for the Statue of Freedom atop the Capitol dome. The medal designs will be made public Nov. 20 at the event.

Image courtesy of the Architect of the Capitol.

Congressional gold medals for 25 of 33 Native American Indian tribes with members who served as military code talkers during World Wars I and II will be presented Nov. 20 in ceremonies at the U.S. Capitol Visitor Center’s Emancipation Hall in Washington, D.C.

Designs for the 25 gold medals to be presented Nov. 20 will not be released publicly until the presentation ceremony.

Gold medals for the remaining seven tribes to be recognized will be presented in ceremonies at a later date, after the designs have been given final approval by the secretary of the Treasury. Obverse and reverse designs for the medals for those seven tribes have been considered and recommended by the Commission of Fine Arts and Citizens Coinage Advisory Committee.

The Code Talkers Recognition Act of 2008, Public Law 110-420, directs that medals be struck to honor the valor and dedication of Native American code talkers during World War I and World War II. As members of the American Armed Forces, these code talkers thwarted the enemy by transmitting secret coded messages using their native tribal languages.

The first reported use of Native American code talkers was on Oct. 17, 1918.

In addition to authorizing the gold medals to be presented to the tribes, Public Law 110-420 provides for the striking and issuance of silver duplicate medals to individual Native American code talkers “if the Native American served in the Armed Forces as a code talker in any foreign conflict in which the United States was involved during the 20th century.”

In the event of the death of an eligible code talker, the silver medal may be presented to the next of kin or representative, according to Public Law 110-420.

The silver medals are to be presented to the recipients or their next of kin in private ceremonies the afternoon of Nov. 20 beginning at 1:30 p.m. at the Smithsonian Institution’s National Museum of the American Indian, according to Leonda Levchuk, NMAI public affairs officer.

The public ceremony Nov. 20 in Emancipation Hall for the gold medal presentations is scheduled to begin at 11 a.m. Eastern Time. Hundreds of members of representative medal recipient tribes are already confirmed to attend, with some tribes sending more than 150 representatives to the ceremonies, according to the U.S. Mint.

The 20,000-square-foot Emancipation Hall is the main hall of the Capitol Visitor. It was legislatively renamed from Great Hall in 2008.

Emancipation Hall displays the original plaster cast of the Statue of Freedom, the bronze statue that stands atop the Capitol dome.

Coin World will publish details about the availability of the bronze medals from the Mint as they become available. ¦