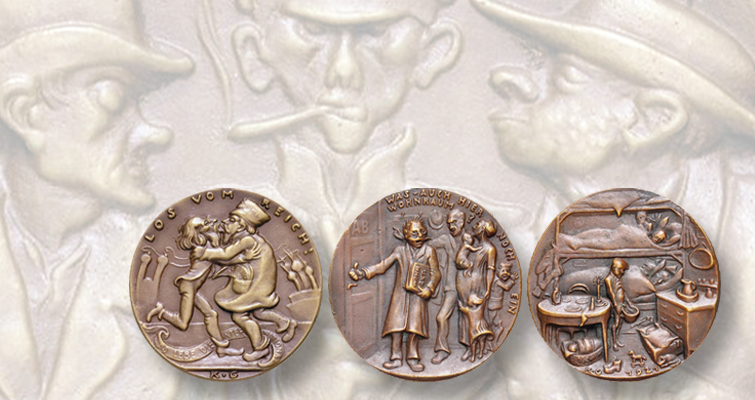 A selection of medals created by Karl Goetz will be included in the CNG online auction to be held Sept. 13 to 14.

All images courtesy of CNG.

The medals of German Expressionist medalist Karl Goetz remain popular more than a century after most of his best-known works were created.

As G.W. Kienast wrote in the introduction to his 1967 book, The Medals of Karl Goetz, where the author recorded the artist’s 633 medals created over more than 40 years, “His work is of such a nature that it has aroused the enthusiasm of many people, while yet displeasing numbers of others.”

The author worked with the artist’s son Guido to discover Goetz and his medals, and to interpret the medals’ scenes, which were largely based on current events especially of  World War I and its aftermath.

Four of the medals included in the CNG sale, each carrying modest estimates of $300, are organized in a Kienast section titled “Turbulent years in German History Reflected in the Medals,” starting with the World War I series from 1914 to 1918.

A Goetz medal dated 1917, listed as Kienast (Opus) 196, is known as the “Battle of Verdun” medal, with an obverse featuring a skeleton standing left, in the process of kicking the figure of French symbol Marianne. The medal’s purpose was “to record the senseless killing of young soldiers on both sides,” and the reverse inscription is translated as “And quiet flows the Rhine.” CNG adds on the reverse, “Heart stabbed with dagger with head of French president Raymond Poincare on the hilt; with cap above, crossed torch and olive branch in background, spectacles draped over front.”

Carrying the same estimate is a 1919 medal listed as Kienast 222 and graded Extremely Fine known as “The Soviet-Bavarian Government” medal. The obverse depicts three socialist revolutionaries with the reverse showing Gustav Landauer dancing with Vladimir Lenin. Kienast explains, “For nearly 4 weeks in April 1919, the power was in the hands of a few extremists, some of whom were Russian communists. Goetz shows on the obverse typical representatives of the Bavarian Central Council of Workers’ and Soldiers’ Councils.”

Goetz presumably purposefully misspelled BAIERN to show his contempt for this type of government while the reverse shows Laudauer, a prominent member of the socialist-Bavarian government, dancing for joy that his ideals have come true with the Russian leader Lenin.

Goetz approached these WWI-era works as one who “expressed the sentiments of many Germans as a reporter and spokesman, and his own patriotic fervor, but this was all,” according to Kienast, who said, “He was not the shaper of a mythology. As a patriot his foremost concern was with his country.”

The Kienast text organizes the 1919 to 1923 medals under the heading “The Revolution and the Occupation of the Rhine and Ruhr.” A 1921 medal, Kienast 280, is given the title “Scarcity of Living Space” referencing the scarcity of living space in Germany after World War I.

German housing offices permitted a certain number of square feet per person, with inspectors recording surplus space. The result was that multiple families were forced to live together in one flat. Kienast writes that the medal’s obverse depicts “a housing inspector standing in front of a door with sign AB on it (German colloquial term for toilet), exclaiming ‘What, still another living room?’ ” The reverse shows the poor conditions of life for many Germans at the time, sleeping  two people to a bed in three-tier bunks; one baby sleeps in the drawer of a chest and another in a wicker basket under the table, and no separate toilet.

It is graded Near Extremely Fine.

“Father State” is a 1924 medal that reflects on the issue of inflation and the idea that it can be simply overcome by hard work and prayer.

The obverse inscription can be translated as, “Ten billion mark in paper — that is one copper penny. The former is very much, the latter very little,” and references the hyperinflation that overcame Germany as it paid off its World War I debts.

As CNG explains the obverse shows a beggar standing left, a crutch under his shoulder, holding a cap and kneeling to pick up a 1924 1-pfennig coin, while the reverse shows a “caricature of a French colonial soldier standing facing, resting rifle on ground; to right, woman kneeling right in prayer and man standing right, digging with shovel.” 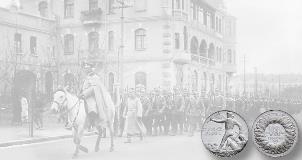 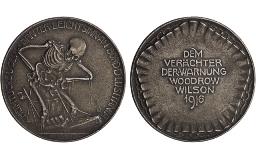 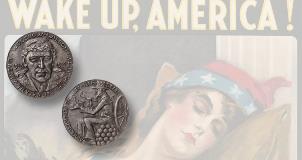