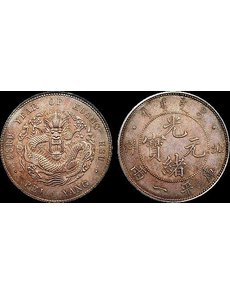 The majority of some 7,000 examples were melted when the emperor died shortly after launching the project, and today the coin “is considered one of the classic rarities of Chinese numismatics,” according to the auction catalog.

All successful bids were subject to an 18 percent buyer’s fee, with a discount to 15 percent for certain payment methods. Prices here reflect the 18 percent fee.

Greece, Sicily, Agrigentum, circa 415 to 400 B.C. silver tetradrachm, 17.2 grams, “reportedly only about a dozen examples of this type are known, nearly all of which seem to be struck from the same obverse and reverse die pairing,” this example using a slightly different reverse than the majority, “lightly toned,” Very Fine, $26,550.