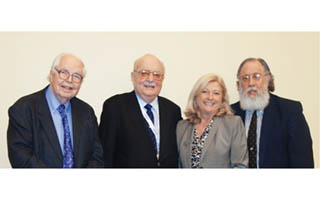 A survey taken among dealers a few years ago placed Baltimore far in the lead as America’s favorite city for coin conventions. It has a modern airport that is quite hassle-free, the gates are easy to get to, and it is a nonstop flight from many cities. Draw a 300-mile circle around the city and you probably get 50 percent or more of the active numismatists in the United States.

I spent part of my childhood there, and my brother and sister were born in the city. Numismatically, it has an unsurpassed tradition. In the early 19th century, Robert Gilmor Jr. formed the largest private collection of the time (with two Brasher doubloons), followed by Mendes I. Cohen, Dr. Robert Massamore and others.

Front row center was T. Harrison Garrett, a scion of the Baltimore & Ohio Railroad founding family, who by the time of his passing in 1888 had the most extensive private collection in America, that of Gilmor having been dispersed.

Then came Waldo Newcomer in the early 20th century, followed by Louis E. Eliasberg Jr. who had one of everything from the 1793 Liberty Cap half cent to the 1933 Saint-Gaudens gold double eagle.

Recently, I spent three days immersed in the Whitman Coins & Collectibles Expo. It was the most dynamic convention I’ve been to in a long time. Action was nonstop. I spent most of my time in and around the Stack’s Bowers Galleries auction, not in the sale itself as much as outside in the lounge area talking with friends — dealers and collectors. This was quite a change from my normal time going to the bourse, which I was able to visit only briefly.

Quite a few people brought books for me to autograph. One man had a copy of my long since sold out 11-pound California Gold Rush History Featuring Treasure from the S.S. Central America, published in 2001 to the extent of over 4,500 copies. He paid $350 for it on the Internet (good news for other owners!).

On March 28, Christine Karstedt organized a two-hour “Meet Harvey Stack, Larry Stack, and Dave Bowers” gathering to which everyone was invited. The three of us were in the front of the room and fielded questions from the audience. The emphasis turned out to be on stories and adventures of the 1950s and 1960s. It could just as well have been called “Nostalgia Time.” I recalled that in 1953, the first year I was a dealer (at age 14 and in high school), I missed buying a gem Proof 1895 Morgan dollar as Joseph Stack visited the owner a week earlier and paid the record price of $200. Value today: $75,000. Then there was the situation in 1954 when I needed a Proof 1856 Flying Eagle cent for a client and called Harvey Stack, who apologized that he had to charge $325 for the one he had, as another buyer wanted it as well. Value today: $30,000-plus.