Christmas arrives early (on coins, of course) in Isle of 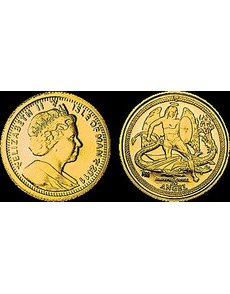 The annual Angel gold 20th-ounce coin from the Isle of Man features an “Eight Maids-a-Milking” privy mark on the reverse (inside the flames emitted by the dragon), continuing a series honoring the “Twelve Days of Christmas” song. 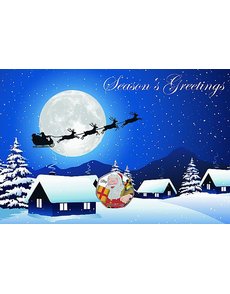 The Isle of Man celebrates Santa Claus on its annual 50-penny coin for Christmas, which is available in plain and colorized versions, and arrives displayed in Christmas cards suitable for sending to friends and family.

Though it is not yet Dec. 25, Christmas has arrived on the Isle of Man: the island’s annual Christmas coins are now available from issuer Pobjoy Mint.

In a series that began in 1980, the annual 50-penny coin again features a Christmas theme, depicting Santa Claus. In another program, the Angel 20th-ounce gold coin bears the eighth in a series of special privy marks, this year celebrating “Eight Maids-a-Milking,” representing the eighth day of Christmas in the famous song “The Twelve Days of Christmas.”

Whether known as Father Christmas, Santa Claus, St. Nicholas or Papá Noel, he is always instantly recognizable with his red suit trimmed with white fur, his matching hat and his long white beard and moustache. Children all over the world eagerly anticipate his visit on Christmas Eve with his large sack of toys, visible over his shoulder on the reverse of the coin.

The design is offered in “Diamond finish” copper-nickel and Proof .925 fine (sterling) silver versions, both alloys available plain or with color enhancement.

To create the “Diamond finish,” the Pobjoy Mint treats the blanks “with a special diamond polish and [pieces] are handled like Proof quality coins. Dies are also finished with the diamond polish and each coin is struck four times.”

Each of the copper-nickel and silver versions of the coin is presented in a complimentary Christmas card, which this year shows Father Christmas in his sleigh flying above the rooftops of a snowy village.

In addition, a Proof .9167 fine (22-karat) gold version of the coin is available, packaged in a presentation box rather than on a card.

The obverse of the coins bears the Ian Rank-Broadley effigy of Queen Elizabeth II.

All the versions (copper-nickel, silver or gold) weigh 8 grams and measure 27.3 millimeters in diameter.

The gold version is limited to a mintage of 250 pieces.

The Pobjoy Mint has issued Angel gold coins for the Isle of Man since 1984, and in recent years has issued special Angel 20th-ounce .9999 fine gold coins to celebrate the Christmas season.

The reverse of the Angel coins shows the Archangel Michael slaying a dragon, in only the third Angel design in the coin’s history.

The 2011 Angel is the eighth coin in the 12 Days of Christmas series and represents “Eight Maids-a-Milking” as a privy mark on the reverse of the coin. This collection will continue for the remaining years until the famous Christmas carol is complete.

The Rank-Broadley effigy of Queen Elizabeth II also appears on the obverse.

The coin weighs 1.555 grams, measures 15 millimeters in diameter and has a mintage limit of 1,000 pieces.

Each Angel 20th-ounce coin is encapsulated and presented in a handmade case with a certificate of authenticity, at a price of $254.