Chipped hubs are few and far between on coins 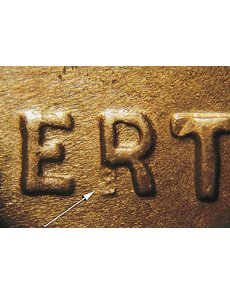 A close-up of LIBERTY in a 1936 Lincoln cent illustrates a chipped hub. The obverse die was generated by a working hub with a chipped letter R.

Courtesy of Chris and Charity Welch, and Jason Cuvelier. 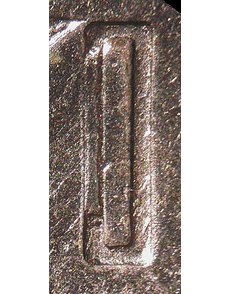 The left side of the 1 in the numeral 10 is missing on the reverse face of this 1972 Colombia 10-centavo coin. This portion of the working hub chipped off, carrying away some metal below the lost element. 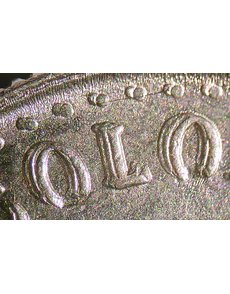 The bottom is missing for both Os of COLOMBIA on this second 1972 Colombia 10-centavo coin. The obverse face also shows a strong tripled die, an unrelated die variety.

Defects in working hubs tend to be small and easy to overlook. They also don’t occur very often.

A working hub is a steel cylinder that carries a coin’s design in bas relief. In other words, the design is identical in size and appearance to what you would see on a coin.

Among U.S. coins, a well-known example of a chipped working hub can be found among 1936 Lincoln cents. In this case the left leg of the R of LIBERTY has broken off.

I recently purchased an entire roll of these cents (all well-circulated) from Chris and Charity Welch. It was difficult to discern microscopic die markers on the heavily worn surfaces of these coins. Nevertheless, among these 50 examples, I could identify a minimum of three die pairs, indicating that the hub chip escaped notice for quite some time as it was used to hub a succession of dies. The sheer abundance of these cents would independently support the presence of multiple die pairs.

Other chipped hubs are even more insignificant. Several are depicted on the Lincoln Cent Resource website (www.lincoln
centresource.net/forums/show
thread.php?t=30866) with links to other images. Not mentioned there is a 2002 Lincoln cent I recall seeing in which the left corner of the first 2 was chipped off.

Larger hub chips can be found among world coins. The reverse face of a 1972 Colombia 10-centavo coin shows a hub chip affecting the numerical portion of the denomination. The left side of the 1 in 10 has chipped off.

This example displays a feature useful for distinguishing between chipped hubs and unrelated errors that look superficially similar. You’ll notice that the missing portion of the 10 is still visible in the form of a sunken trace. When a piece breaks off a design element on the hub face, it sometimes carries away metal lying slightly below the plane of the hub’s field.

Not shown is the obverse face of this 10-centavo coin. It displays a strong doubled die.

Another 1972 Colombia 10-centavo coin shows two hub chips on the obverse face. For both Os of COLOMBIA, the bottom portion is missing. This chipped hub co-occurs with a strong tripled die on the same face. The tripling demonstrates that the working hub was squeezed at least three times into the working die, with offset between hub and die occurring in each instance.

Chipped hubs are easily mistaken for filled die errors. The latter error occurs when die fill (“grease”) — a mixture variably composed of lubricant, metal dust, and dirt — completely fills a recess in the die face without spilling over onto the field. A chipped hub can be distinguished by the following diagnostics:

(1) The missing portion of the design element is sharply and abruptly demarcated. Filled die errors often show a softer margin.

(2) As mentioned above, a chipped hub may show a sunken outline of the missing portion of the design element.

(3) If the identical defect is found on many examples, and especially if more than one die is involved, there can be no doubt that a chipped hub is responsible.