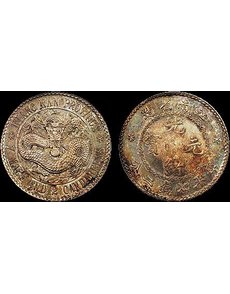 One of Kiangnan Province’s first silver dollars led all bidding in Stack’s Bowers and Ponterio’s April 1 to 3 Hong Kong auction, realizing $298,750 with the 19.5 percent buyer’s fee.

One of the early silver dollars from China’s Kiangnan Province led all bidding during Stack’s Bowers and Ponterio’s April 1 to 3 auction in Hong Kong, realizing $298,750 with the 19.5 percent buyer’s fee.

The undated (1897) silver 7 mace and 2 candareens coin (dollar) featuring an ornamental edge, and whose obverse features a special inscription where the cross-bars of the A’s in KIANG-NAN are scarcely visible, was the top lot in the auction.

The coin is graded and encapsulated Mint State 62 Secure by Professional Coin Grading Service and had an estimate of $75,000 to $125,000 in U.S. funds.

It was one of many highlights from numerous consignments, including the Dr. John Abner Snell Collection, the second part of the Frank Robinson Collection, the Gen. M.S. Newton/Kenneth Bressett Collection and Part III of the Wa She Wong Collection.

Of the 1,750 lots offered, 1,620 lots (92.5 percent) were sold in the three sessions that comprised the first of three Hong Kong auctions the firm conducted from April 1 to 4.

The first auction realized an estimated $7.4 million, including the buyer’s fee, as part of an overall realization of $10.54 million, according to the firm.

China, undated (circa 1750) gold 10-tael ingot, 367.89 grams, “typical shape with slightly raised ends,” “three stamps across face similar to those found on ingots from the wreck of the VOC East-Indiaman Geldermalsen except the stamps on this bar are circular instead of square,” EF, $101,575.