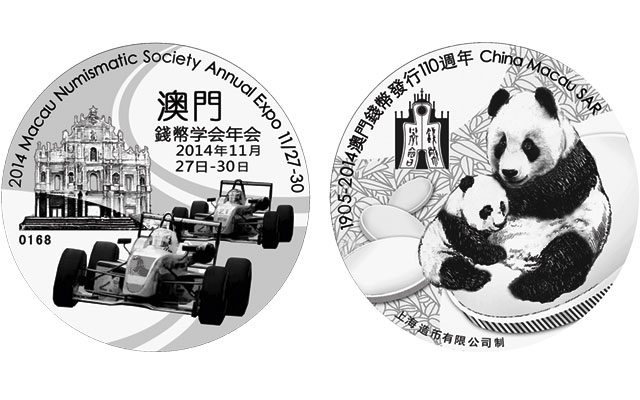 Organizers of a coin show in Macau are issuing commemorative medals to honor the Nov. 27 to 30 show. The medal's designs are shown here.

A medal being issued for the 2014 Macau Numismatic Society annual expo was designed by an award-winning artist from the Shanghai Mint Co. Ltd., and produced by that mint.

Yu Min, the designer of the 1983 Panda coin (which was awarded the Silver Coin of the Year award in 1985), designed the medal. The medal is the first numismatic show medal produced by the Shanghai Mint in nearly 20 years, according to show organizers.

The artist has designed more Chinese panda coins than all other designers combined, the organizers said.

The obverse of the medal shows race cars from the Macau grand prix with the Macau landmark, the Ruins of St. Paul. An image representing the Year of the Horse appears on the grill of the first race car. A bilingual (Chinese/English) inscription gives the show name and dates.

The reverse of the medal features two pandas sitting on large, coin-like discs, against a bamboo background, with the Macau Numismatic Society logo also included. Various inscriptions appear in Chinese or English.

Serial No. 1 gold and silver medals will be auctioned during the Champion Hong Kong Auction’s Nov. 30 auction, with all proceeds benefiting the Macau Numismatic Society.